This superb sampler of Marsalis performances recorded between 1985 and 1999 contains eight originals and four jazz standards, from the New Orleans-flavored “Jig’s Jig” and the bluesy “Root Groove” to ballads like “I Got Lost in Her Arms” and “Where or When.” The music shifts into blistering up tempos on “Cherokee” and the burning “Black Codes” by Wynton’s remarkable mid-’80s quintet. 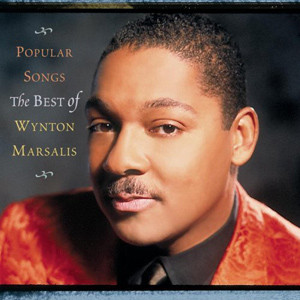 To talk of Wynton Marsalis is to talk of what is going on at the front of the parade, in the middle, and at the back – as well as on the sidewalk, and all the way uptown, and all the way downtown, eastside to westside as well. Everything as bright, as exotic, as obvious and as mysterious as a rain forest on a day both bright from the sun and full of shadows created by the lush foliage. That’s how it is. Those who saw the monumental Ken Burns PBS film called Jazz will not easily forget how effective Marsalis was as a narrator. He knew the music, he understood the folklore, he could illustrate with his horn the differences in certain styles and what certain musicians brought to the art. He spoke of Louis Armstrong having a light in his tone, an illumination in the sound that came from his trumpet.

As one listened to Marsalis himself, and looked at the face and the eyes and the sound of his own voice, one could easily see that he, too, has a light in his being. While it does not approach the kind of light that Armstrong brought with him, one bright enough to change almost all that it fell upon, the light possessed by Marsalis is one that has surely influenced an era and has proven that all of the knowledge from previous eras was neither developed nor learned nor passed on in vain.

The most important thing about Marsalis is that he truly loves music and he loves to communicate the essences of music to his fellow musicians and to his audiences. In his dream world, the ideal is that good old hometown feeling that he drew from the best of his New Orleans background. That dream world inhabits the meaning of his art. It comes from the simple principles that take on profound complexity. What it meant was that, since the human being is on a very limited line, a contract that will terminate far too quickly, one might as well find as many occasions as possible to recognize the arriving and vanishing human qualities that distinguish us from other species. Looking as good as you could, preparing some food that tastes as good as you can make it taste, addressing others with respect and with humor, searching out, whenever possible, the elements that can make a particular encounter take on the feeling of family – those are the kinds of things that Marsalis seeks to bring to his music, to his musicians, and to his listeners.

In order to do what he wants with the kind of authority that has most touched him in the art of those for whom he has the greatest admiration, Marsalis has had to master many different jazz languages. He has investigated his New Orleans roots, the music of Duke Ellington, of Coleman Hawkins, of Count Basie and Lester Young, of Charlie Parker and Dizzy Gillespie, of Thelonious Monk, of Miles Davis, of Ornette Coleman, of John Coltrane and many, many others. Marsalis, in those voluminous studies, was always seeking to discover the qualities that the various approaches had in common. He also was always seeking to understand the logic of what made each great individual, in pure musical terms, so specifically distinguished. The feeling each brought to music was beyond discussion because if the life of human feeling is missing from something that is supposed to be art, then it is not art; no matter how logical or how well executed.

For all of that, as this compilation proves, Marsalis has always been a very fiery player himself, a musician for whom feeling is the number one issue. That fire, of course, is not always heated up to the top; it has many nuances, some of them romantic, others contemplative, even others spiritual. All of them, however, have in common the uncommon warmth we expect of major artists. Then, for sure, there’s the ability that Marsalis exhibits, which is part of his sense of responsibility – his belief that craft, as Ralph Ellison observed, is an aspect of morality. One prepares as well as one can in order to avoid failing the details of feeling when the time to play comes around. If one cannot manipulate one’s instrument, then feeling will be let down, or the breadth of its richness will be imprisoned in a body incapable of liberating it. But the overwhelming virtuosity of Marsalis has sometimes caused those who don’t pay enough attention to come away unmoved. But this is always the trouble great technical masters have. It takes the listeners a little while to absorb all of that facility and learn how to separate it from treeless deserts of display. Sometimes the wonder of a technical rain forest full of the familiar and the unfamiliar, so many exotic plants, so many different colors, such a sweep of green upon green legions of birds and butterflies, takes a bit to get with completely. But, as with all things great and wonderful, the moment you truly get there it seems as though the whole thing was put together with no one else in mind but you.

As you listen to this recording, following this artist through the familiar and through the unexpected, from a youngster exploring the vast heritage of artistic possibility as he moves all the way up to the master that he now is, you will be witness to how that rain forest we know as the music of Wynton Marsalis grew into its own.