Tune in Tomorrow… The Original Soundtrack

In this soundtrack for a movie set in New Orleans, Wynton provides music that evokes the hallmarks of the city, from “Big Trouble in the Big Easy (Pedro Pops Up)” and “Crescent City Crawl” to “Double Rondo on the River (Pedro’s Getaway).” 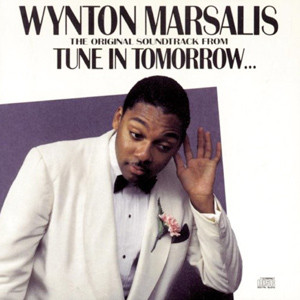 The international tradition of providing specific musical themes, timbres, and rhythms for rituals and dances is the universal precedent for the film score, which developed its relationship to cinematic narrative long before technology evolved for the reproduction of recorded sound. In those theaters where celluloid, controlled light, and darkness made the movie house a twentieth century temple of mystery, adventure, romance, and terror, pit band were prepared music or improvising organists such as Count Basie extended the role Wagner had refined and layered in his operas. Those pit bands or those organists underlined the action, introduced roles, gave atmosphere to sets, and put the emotions, dreams, memories, desires, and thoughts of the characters into sound. Mood and pulsation were the primary areas of importance for the film score, and they still are.

The finest handling of those responsibilities by a jazz musician was achieved by Duke Ellington, whose music for Anatomy Of A Murder is perhaps the high point of American composition written specifically for film – given the quality and originality of the score’s melodies, harmonies, colors, and rhythms. It is that standard to which Wynton Marsalis aspires in the music for Tune In Tomorrow…, and the Ellington influence is a guiding element. But even so, the development of this young musician over the last decade is just as evident. Marsalis has long had ambitions beyond the creation of an instrumental identity; he has also worked hard at learning the craft of composing music for both his performing group and larger ensembles. Until now, Crescent City Christmas Card was his most detailed success in that direction. But with this music, we hear quite clearly the substance of the studies he has done of New Orleans music and of the extensions, elaborations, and refinements Ellington brought to that monumental Crescent City synthesis of European an African music throughout his career.

It is that perception of the resources that makes this recording – with its blues-derived melodies, its down-home polyphony, its use of mutes, its grip on swing and on grooves – another soulful to exotic gathering of blooms in the aesthetic victory garden Marsalis has been seeding, watering, and pruning for a decade now. It is an especially radiant affirmation of the powers the lie inside the largest repository of idiomatic passion and technique available to the American musician. The ceremonial gravity, the humor, and the optimism that go nose to nose with tragedy form the force of New Orleans music. All of those qualities underlay this Marsalis work and account for the excitement this most prominent musical son of the South felt when he was commissioned to provide music for Tune In Tomorrow…, which is set in his hometown.

“What was especially appealing to me about this project,” says Marsalis, “was that the characters were so varied that I was afforded the opportunity to work out themes for them and for various scenes while calling upon my own memories and impressions of New Orleans. Whenever I think of New Orleans I think of so many things and of so many different kinds of people. It was quite a thrill to work on this movie and to put the story’s emotions into music. As I continue to write and to study New Orleans music and Duke Ellington, I keep coming to more and more conclusions about all of the things that are here in America for the musician to use. The thing you have to try for is the emotional specificity that only comes from learning the correct techniques for this art form. Sidney Bechet, Louis Armstrong, and Jelly Roll Morton had the understanding in their music. So did King Oliver. And what you say about Ellington is never enough. He was completely beyond style. He addressed jazz and all of its ramifications. The gigantic output he left affirms the power of American music. If we follow his example, which is one of perpetual engagement, we will find the real sources necessary to address the complexities of our world with the appropriate degree of celebration and observation.”

The following italicized paragraphs are Wynton Marsalis’ descriptions of each selection:

“Big Trouble In The Easy” is a tonal description of the movie’s protagonist, radio soap-opera writer Pedro Carmichael. Trouble is his middle name, but always in the name of fun (at your expense). The tune begin with the suspense and drama that Pedro brings to every situation, progresses into the chaos and human confusion that he loves to incite, then ends when he “pops up” to solve the problem he created. His offbeat personality is depicted by two motifs: 1) The mysterious, creative, and contemplative baritone saxophone theme which pops up two thirds of the way through the song, played by Joe Temperley, 2) The humorous, evasive two-note clarinet theme, played throughout by Alvin Batiste.

“Kings Of The Garden District” is the sentimental organ theme which gets its name from Pedro’s famous soap opera.

In “Crescent City Crawl” the organ is transformed by the blues and swing of New Orleans…and Lucky Peterson. This piece is an aural assessment of Crescent City images offered to passengers on the legendary New Orleans electric trolley. As a youngster, I always loved to take in the sights and sounds of the city from the St. Charles streetcar. The wooden chairs, the colorful conductors, and the sliding windows never failed to make a “ride around the belt” something memorable.

“Alligator Tail Drag” is a portrait of the mythical king of the bayou,’ the snare rim rolls symbolize the tail dragging rhythm of Mr. Alligator, while the steady bass pulse represents his patience. In the movie this piece is played by solo clarinet and piano in a cafe to provide the proper southern Louisiana ambiance. We ask why Mr. Alligator is so mean because the middle section of this song is a description of one of his feedings.

“May Be Fact Or Fiction” takes its inspiration from one of the main themes of the movie: the shaky line between reality and fantasy. It is played when our two would-be lovers, Julia and Martin, first encounter each other; it says, as their relationship proves, anything can and will happen.

“Social Soft Shoe” is written for the adorable, aspirant socialite, Olga. It describes the light banter and posturing that take place at the type of antiseptic, polite parties she’s famous for throwing.

“Mama Leona” is a dance number which accentuates the Afro-Spanish sensuality of night life in the famous “French Quarters” of New Orleans.

“I Can’t Get Started,” “The Grand Marshall,” “The Ways Of Love,” “On The Eve Of Entry,” and “Don’t Run From Fun” all chronicle the progression of Julia and Martin’s relationship. “I Can’ Get Started” is Martin’s credo when he first attempts to woo an unbelieving Julia. “The Grand Marshall” is how he feels when she finally gives him a chance to present his best self. “The Ways Of Love” plays as their encounter becomes more revealing. “On The Eve Of Entry” captures Julia’s passionate feelings when she agrees to marry him. Then their ensuring excitement en route to the altar, “Don’t Run From Fun” portrays her flight (with help from Pedro) from Martin into the tiger trap of pain and disenchantment.

“Albanians” are the favorite targets of Pedro’s hysterical attacks. This short piece is a parody of eastern European folk music. The type of parody that, if taken seriously, produces that hysteria which is the cornerstone of all ethnic or religious misconceptions.

“Sunsettin’ On The Bayou” is a tonal testimony to the varied dimensions of romance that one night in New Orleans can inspire.

1) “Dusk On The Delta” – the suave, elegant, sunsetting salutation on Lake Pontchartrain.
2) “yas, yaz, yaz, all night Jass” – the exciting, sultry-driven intensity of world famous Big Easy night spots.
3) “Pre-Morning Masquerade At The Cafe Du Monde” – a period of predawn basking in the afterglow with some Beignets and hot chocolate at the Cafe Du Monde. Perhaps an evening like this would lead Julia back into the arms and heart of Martin for our final rendition of “The Ways Of Love.” Perhaps not.

“Double Rondo On The River” is our last encounter with Pedro. It portrays the humor and seriousness of his journey through life and uses the same two themes as “Big Trouble In The Easy,” but in “Double Rondo On The River” the original clarinet theme is played by the baritone sax and the trombone, while the original baritone theme is passed through the ensemble. It is also called “Pedro’s Getaway” as a reminder of Pedro’s attitude, if things get “too hot” …split.

This splendid score makes obvious the fact that Wynton Marsalis has a talent for composition that may someday equal – if not exceed – his unprecedented instrumental gifts. Part of the excitement of this recording, then, is that it gives us more than a slight indication of what we should expect from him as time takes us to the turn of the century. Consequently, the music for Tune In Tomorrow… should be heard not only as a great swing forward for this young man, but also as an omen of forthcoming aesthetic delight.

5. May Be Fact Or Fiction
(W. Marsalis) Skaynes Music

11. On The Eve Of Entry
(W. Marsalis) Skaynes Music

Johnny Adams, Vocals (“May Be Fact Or Rction”)
Shirley Horn, VocaIs (“The Ways Of Love” and “I Can Get Started”)