Pulitzer Prize and nine-time Grammy Award®-winning musician, and Managing and Artistic Director of Jazz at Lincoln Center, Wynton Marsalis digs into his rich collection of spiritually inspired recordings at the Columbia and Sony Classical labels for The Spiritual Side Of Wynton Marsalis. This special collection of 15 divine tracks will be available everywhere October 22 through Columbia/Sony Classical/Legacy, a division of SONY MUSIC ENTERTAINMENT.

The release of The Spiritual Side Of Wynton Marsalis coincides with the month-long “Abyssinian: A Gospel Celebration Tour” featuring the Jazz at Lincoln Center Orchestra with Wynton Marsalis, conductor Damien Sneed, and 70-voice Chorale Le Chateau. Billed as “an historic hand-clappin’, tambourine-slappin’ celebration,” the tour opens at Memorial Hall in Chapel Hill, NC on October 3 and concludes in Boston’s Symphony Hall on October 27 (see tour dates below). Production for the 16-city tour is staggering: more than 85 people on the road with four buses and an equipment truck at a cost of more than $2 million performing before a combined audience of over 30,000 people. Following the release of The Spiritual Side Of Wynton Marsalis on October 22, the tour comes to New York City for three homecoming dates at Jazz at Lincoln Center’s Frederick P. Rose Hall, October 24 through 26.

Simeon Marsalis writes in his liner notes, concerning his father’s spiritual beliefs, “we learn that Wynton is a secular humanist whose growth was grounded in Christian philosophy by his mother.” Wynton reflects, “Spiritual means the innermost reflections on the most high and on an all-pervasive consciousness. It is a basic warmth and acceptance of human beings in the glory of unruly humanness.” The tracks that Wynton has personally selected for The Spiritual Side Of Wynton Marsalis range from duets, trios and small combos to full orchestral settings, and were chosen from seven albums originally released on the Columbia and Sony Classical labels. The music, Simeon writes, “strikes a balance between the sacred and secular worlds.”

This balance is heard on tracks featuring vocals by contemporary gospel luminary Shirley Caesar (“I Hear a Knockin”and “If I Hold On”), along with the genre-defying song craft of singer Cassandra Wilson (“Oh We Have a Friend in Jesus”) and on other tracks on the recording. The album’s centerpiece is a previously unreleased performance of “Precious Lord, Take My Hand,” by gospel legend Marion Williams, recorded at age 65, in 1993, the year before her death. This song, from the pen of Thomas A. Dorsey, the father of gospel music, is one of Williams’ signature showpieces.

Among the deep well of recordings from which Wynton draws are:
• In This House, On This Morning (recorded 1992-93, released 1994), his first commissioned work for Jazz at Lincoln Center, in which he first projected his theme of universal humanism, authentically capturing the feeling of “church” and Sunday morning in the American South on “Processional,” “Hymn,” the sermon of “Holy Ghost,” “Precious Lord, Take My Hand” (with Marion Williams), and “Pot Blessed Dinner” among others;
• Blood On The Fields (recorded 1995, released 1997), his Pulitzer Prize winning oratorio on American slavery, featuring Cassandra Wilson on “Oh We Have a Friend in Jesus,” as she channels the hopes and cries of a slave woman finding liberation;
• Sweet Release & Ghost Story (Sweet Release recorded 1996, Ghost Story recorded 1998, released together 1999), sub-titled Two More Ballets by Wynton Marsalis. “Awakening” is from the Ghost Story ballet, inspired by Buddhist teachings about the cycle of life with a tale of a woman caught between the living world and the spirit realm;
• Reeltime (recorded 1996, released 1999), Marsalis’s musical narrative of the nearly forgotten 1923 Rosewood massacre, in which a (mainly) black Florida town was torched by white racists bent on lynching. The massacre was the subject of the 1997 film, Rosewood, directed by John Singleton for which Wynton wrote the powerful score (including the two tracks with Shirley Caesar). Marsalis’ score was subsequently released by Sony Classical.
• Live At The Village Vanguard (recorded 1990-1994, released 1999), a monumental 7-CD box set that melded material recorded by three Septet lineups at the venerable jazz club over a four-year period, making each CD a multi-year entity unto itself, so that no exact date could be specified for the spiritual “Flee as a Bird To the Mountain.”

Simeon compares the theme of The Spiritual Side of Wynton Marsalis to a New Orleans funeral function, “sorrowful but ultimately uplifting” as it alternates tempos. The effect is “designed to celebrate our collective soul,” he writes, “from a single plaintive chant, to an instrumental re-enactment of a Sunday service, to a full choir shouting for redemption.” Simeon writes that his father and grandfather were inspired and uplifted by the integrity and spirituality of A Love Supreme, John Coltrane’s 1965 masterpiece. Today, Simeon concludes, “we are uplifted by [Wynton’s] supreme love for artistic excellence and that most pervasive of consciousnesses, the spirit. ALL RISE.” 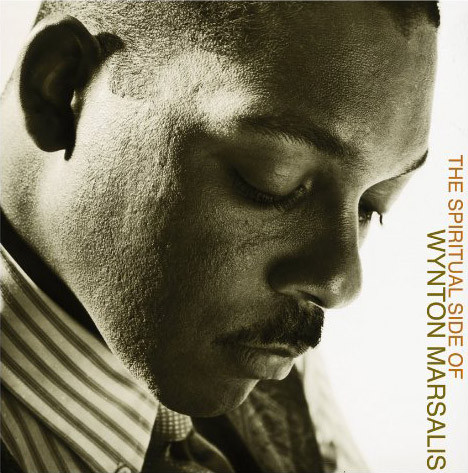