Marsalis is in town recording an album with Eastman winds.

His trumpet may speak loudly, but Wynton Marsalis, the musical wunderkind who has successfully straddled the jazz and classical worlds, has been spending the week in Rochester so quietly that few know he’s here.
Since Monday, the Grammy Award-winning Marsalis Thas been rehearsing at the Eastman Theater with the Eastman Wind Ensemble for an album of chop-busting, turn-of-the-century cornet solos.
CBS Masterworks, a major classical label, is taking over the Eastman Theater with a truckload of electronic gear to record the album here this weekend.
As he spoke in an Eastman Theater dressing room Wednesday, Marsalis, 23, looked jazz-cool from the tip of his trumpet to the toes of his high-top sneakers.

DRESSED IN cream-colored sweat pants and a New Orleans “Party Blitz” T-shirt, the laid-back winner of both jazz and classical Grammys in 1984, paced slowly and deliberately, his trumpet issuing licks at the speed of light, the notes punctuated only by his terse comments.

It’s been said that the young artist is somewhat tense around veteran performers of classical music.
“I like people who are serious about playing the music – whoever that is,” responded Marsalis a bit defensively. “You can’t trust anything you read about me.”
One thing he does trust is the Eastman Wind Ensemble, the Eastman School’s renowned student wind band. “It’s excellent,” said Marsalis. “They’re doing an excellent job. They’re excellent arrangements, people have practiced, and people are enthusiastic about playing.”

DOWNSTAIRS, ON THE stage of the Eastman Theater, students had gathered for the afternoon rehearsal. They seemed receptive to his comments.
“Play this part like you were a little kid, just fascinated with the sounds,” Marsalis said at one point. Facing the orchestra most of the time, he often amplified the instructions of conductor Donald Hunsberger, an unusual practice. But Marsalis occasionally had students laughing at his quips, and he and Hunsberger seemed to enjoy a good-humored rapport.

Baritone horn player Mark Kellogg said of Marsalis, “I think he’s a technical marvel on the instrument. And so far he’s captured the style very well…. I think that everybody plays with a lot of pride when they play with somebody like him.”
The album, as yet unnamed, will be released next year and will contain works by trumpeters Herbert Clarke and Jules Levy, trumpet pedagogue J.B. Arban, and more familiar pieces like Rimsky-Korsakov’s Flight of the Bumblebee or Flotow’s The Last Rose of Summer.
Traditional “encores,” comprising the traditional tune Believe Me If All Those Endearing Young Charms and the spiritual Sometimes I Feel Like a Motherless Child, also are to be included.

THE COST OF 10 hours of recording, transportation, a three-man staff, and post-production editing and mixing, likely will top $50,000. Each of 48 participating students will earn $600 to $700 – union scale.
Recording with the Big M is a boon for the Eastman School and the Ensemble, which made records semi-annually in the ’50s and early ’60s but which hasn’t pressed a disk for four years.

“I think the Marsalis album was originally conceived when ICM (Marsalis’ management) suggested he tour with the Wind Ensemble about two years ago,” said Hunsberger. So the bargain was struck – or at least talked about – before the dual Grammys brought Marsalis overnight recognition.

The tour never materialized, but the album did. Hunsberger, director of the Ensemble for 20 years, spent the summer making new arrangements.
“What Wynton said was ‘I want to do the solos, but I’d like all new arrangements of the things,” said Hunsberger — not to make the solos more contemporary, but to offer the soloist the resources of the larger, more versatile modern wind band.
HUNSBERGER, CHIEF arranger for the U.S. Marine Band during the Korean War, said he returned to the band’s Washington, D.C., library to find appropriate pieces. He and Marsalis later extracted a dozen or so.
But despite Marsalis’ talents, the project is not without risks. First, turn-of-the-century band music represents yet another genre for the man who jockeys between the jazz and classical worlds with more than a modicum of grace.

And he had to master more than one composer’s technique for the collection of showpieces. “In a way it’s like a circus,” says Hunsberger, “and Wynton has to be the tightrope walker, the juggler and everything in between.”
If anyone fits that description, it’s Marsalis. Performances still were a little rough at the edges in yesterday’s rehearsal. But the phenomenally versatile technique that has marked Marsalis’ previous recordings, was apparent everywhere. “We met during the summer,” said Marsalis, referring to Hunsberger. “And I got pointers on how to play the music in correct style.”

And although Marsalis still is experimenting, his trumpet flew nonstop through the three minutes and 2,260 notes of Paganini’s perilous Perpetual Motion. A final risk in the project is that the personnel in an ensemble like the Eastman change each year, while the ability to play together well usually accrues with time.
“In a way it’s self-annihilation,” said Hunsberger. “It’s a big risk.”.
Still, student enthusiasm and the shot in the arm provided by Marsalis’ presence could carry the day.

After the rehearsal yesterday, Marsalis addressed other Eastman students who were invited to listen in. Professionals, he told them, can become blase, but students are at the peak of their enthusiasm. He admonished them to hold on to their musical “sincerity.”
“But I know you don’t want to be preached at,” he concluded. “Be cool.” 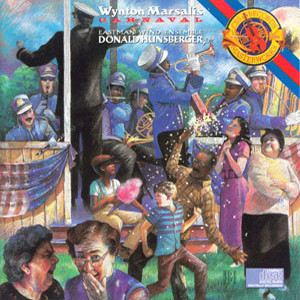