Carnaval: 11 Solos for Cornet and Piano

Celebrating 25 years, Alfreds recently acquired Carnaval project is an epic collection of eleven solos, crafted by Hunsberger himself for Wynton Marsalis. Carnaval: 11 Solos for Cornet and Piano is a studio staple for solo cornet or trumpet players for use in recital or for the soloist in preparation to perform with the wind band accompaniments. Check out the related album: Carnaval 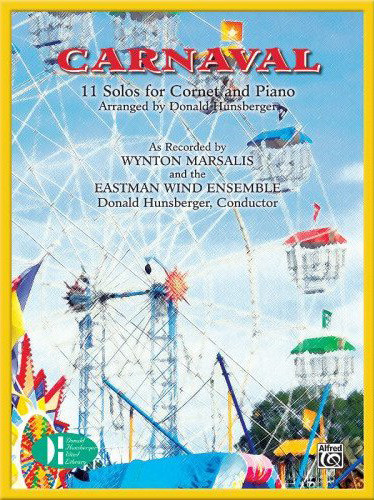 It gives me great pleasure and satisfaction to see this published set of cornet/trumpet and piano arrangements of the works I recorded with Donald Hunsberger and the Eastman Wind Ensemble on CBS Masterworks. I believe that this literature is an important, integral part of the overall cornet/trumpet repertoire, as well as an important milestone in the historical development of the cornet/trumpet as an instrument.

This project began in 1984 when CBS Masterworks asked me to consider recording an album of cornet masterpieces with a wind band accompaniment. I immediately felt that this was something I wanted to do because I grew up playing these pieces and entered all the festivals and contests that high school players today have available to them. One area I wanted to see changed for this recording, however, was the arrangements: In particular the introductions and breakstrains that today sound so “corny” because they frequently were more “filler” than substantive musical material. So, during a visit to the Eastman School of Music, where I was appearing as soloist with the Eastman JazzEnsemble, I met with Donald Hunsberger, Conductor of the Eastman Wind Ensemble and a well-known arranger-orchestrator. I asked him to create new arrangements for the solos to be included on the album. The result, as you can hear, and now see, provided an entirely new view of these great solos; we used only the original melodic lines and Don wrote a combination of new and modified original material for the accompaniments. The cadenzas are also new, except for Herbert L. Clarke’s cadenzas where I wished to use some of his original writing.

Following the recording, the project continued with a tour of the East Coast and Canada. The Eastman Wind Ensemble and I played major halls such as The Place des Arts in Montreal, Roy Thompson Hall in Toronto, Boston’s Symphony Hall, the Academy of Music in Philadelphia, Kennedy Center, Washington, Carnegie Hall in New York and finished in the Eastman Theatre in Rochester.

During the tour, many trumpet players asked me how I felt about the stature and place of solos such as these in the overall trumpet repertoire. Well, first of all, I think these cornet solos are important because they cover all aspects of trumpet/cornet technique regardless of the style of music. If you can play one of the solos well, you have the technique necessary to play the Haydn Concerto, the Bach Brandenburg Concerto No. 2 or the Paul Hindemith Sonata. Most importantly, practicing these pieces helps you to develop a lyrical conception. The principal themes of these solos frequently came from operatic arias, popular songs of the day or beautiful, simple folksongs, which require a singing approach that challenges the tone and helps develop nuance and beauty of phrasing. The variations on these melodies cover techniques such as slurring, single tonguing, double or triple tonguing, trills, grupettos, every aspect of technique, which, combined with tone and timbre development in different registers, really covers all the broad responsibilities of the trumpet/cornet performer.

To develop these techniques and skills, I feel that three books are indispensable for the young performer: the Schlossberg Daily Drills, the Arban Complete Conservatory Method for Trumpet and the Clarke Technical Studies. If you diligently practice the 150 Art of Phrasing melodies in the Arban book and combine this with listening to and analyzing lyrical music performed live or on records, you will begin to develop a lyrical approach. Listen to opera singers and other instrumentalists (violinists, flautists, etc.) and hear how they interpret music from different periods of composition; listen to tapes of Herbert L. Clarke or Arthur Pryor (on the trombone), George Swift, Del Staigers, etc. and analyze their approach to phrasing and to the technical problems of the variations, waltz or caprice.

Above all, always remember, a good melody is just that… a wonderful experience that sings and soars, one that must be a vehicle of lyrical expression. These solos are not necessarily gripping or thought-provoking; they were intended to be showcases for their performers, persons who played a major chair in the band and then became the figure in the spotlight for a few minutes. They all wrote and played to their own strengths and unique capabilities. If you could triple-tongue extremely well, you would write like Jules Levy, If slurring was your forte like Del Staigers, you would use much of that. If you could play just about anything in any register, as Herbert L. Clarke could – well, that would open many writing and playing options for you.

Understanding the historical development of the cornet/trumpet and the different styles and techniques from various periods is of utmost importance to anyone who wishes to have a comprehensive conception of playing. You must know the various piccolo trumpets, the natural trumpets (without rotary valves or pistons), the keyed bugle and trumpet plus all the advances made in writing and performance techniques after the addition of the valves. Today’s up-to-date trumpet player must be able to relate performance practices to each period of style and composition and have a solid understanding of the history of the instrument and other brass instruments.
The music in this folio is an important part of this history.