Wynton Marsalis: Swinging Into the 21st

If we call an artist who averages an album per year prolific, what then to say about Wynton Marsalis’ output of 1999-2000? During that period Marsalis released nine albums, each showcasing a different sector within his domain. Marsalis called the series Swinging Into the 21st, and that run of albums has now been compiled into an 11-disc box set that also includes All Rise, Marsalis’ monumental 2002 orchestral/vocal project.

Ambitious? Undeniably. Ego stroke? Marsalis has been accused of that. But the music speaks for itself: Each album, though they vary wildly in scope and scale, is a worthy addition to Marsalis’ canon. Grouped together as they have now been, the recordings that comprise Swinging Into the 21st reinforce the notion that Wynton Marsalis—while perhaps not an artist who purposefully pushes jazz into the future—has long been one of the genre’s most respectable and intrepid contemporary composers and performers.

A Fiddler’s Tale, the first of the 1999 releases, was, perhaps, Marsalis’ way of announcing the extent of his plans. Featuring musicians from the Chamber Music Society of Lincoln Center, the sprawling work integrates narration (written by Stanley Crouch, spoken by André De Shield), small chamber group and Marsalis’ trumpet in an adaptation of Stravinsky’s L’Histoire du Soldat. While some found the work precious (“She’s floating on a dream cloud of celestial notes,” goes one line), others admired its audacity and serene nature. A Fiddler’s Tale was hardly the most memorable of the ’99-’00 crop, but neither was it a failed effort by any stretch. Half of At the Octoroon Balls reprises the musical concepts of A Fiddler’s Tale minus the speech, while the other half, from which the album took its title, was performed by a string quartet sans Marsalis.

Standard Time, Vol. 4: Marsalis Plays Monk and Standard Time, Vol. 6: Mr. Jelly Lord (vol. 5, a blues set, was actually released in 1998, prior to vol. 4) found Marsalis in more familiar territory: preserving the jazz heritage. For the self-explanatory former, Marsalis, in a septet configuration, rounded off Monk’s rhythmic angles and gave 14 of the pianist’s compositions horn-dominated arrangements (Eric Reed took the piano chair), while Jelly Roll Morton’s compositions, recorded over a two-day period in New York with a somewhat larger ensemble, retained the New Orleans classicism that Marsalis has advocated since day one of his career.

Big Train was perhaps the oddest of the nine releases conceptually, an album-long tribute to the peak era of American train travel (a common means of transportation for 20th-century jazz artists), on which Marsalis and the Jazz at Lincoln Center Orchestra summoned the sounds and rhythms of the rails. Sweet Release & Ghost Story consisted of two ballets, the first (written for the Alvin Ailey Dance Theater) featuring Marsalis and orchestra and the latter for small band. Reeltime was Marsalis’ soundtrack for Rosewood, a film depicting a 1923 massacre of African-Americans in a Florida town. Cassandra Wilson and Shirley Caesar are among those contributing to one of the more poignant recordings in the collection.

If there is a highlight of the series, 2000’s The Marciac Suite may be it. Inspired by the annual Marciac Jazz Festival in France and performed by Marsalis’ septet of the period, the work (13 movements, 12 keys, four time signatures) is a grand, if not grandiose, piece. Marsalis is buoyant and outstanding throughout. Finally, there was Selections From the Village Vanguard Box Set, a distillation of a previous seven-disc set that chronicled Marsalis’ septet’s evolution over the four-year period of 1990-94 at the Vanguard. Pared down from the eight-plus hours presented in the full box, it’s a powerful live document that, while not covering the expansive ground the full set does, is still representative of one stupendous band.

All Rise, appended to the box although not released until 2002, fits in thematically. A massive undertaking, it was commissioned and first performed by the New York Philharmonic in 1999. Inspired by Duke Ellington’s large-scale sacred works, the All Rise album—featuring the Jazz at Lincoln Center Orchestra, the Los Angeles Philharmonic Orchestra (conducted by Essa-Pekka Salonen) and a 100-piece vocal choir—took on new meaning when it was recorded in the days immediately following 9/11. It remains one of Marsalis’ most moving creations.

Not all of the recordings collected in Swinging Into the 21st are likely to appeal to everyone in Marsalis’ vast and diverse audience. Some of the recordings approach the esoteric, requiring more than casual attention: A set of train tunes may not find favor with the ballet fan or those who gravitate toward Monk interpretations. But on its own, each is a rewarding listening experience—Wynton Marsalis was on a roll during the days of Y2K. (Note: A pared-down single-disc collection, titled Selections From Swinging Into the 21st, has also been released.) 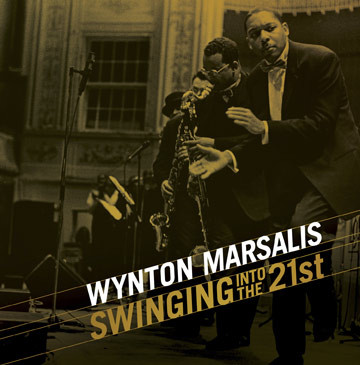