What a responsibility, what an inspiring challenge, what an honor it is to have the opportunity to replicate and help preserve the greatest body of music America has yet given to the world! Intimidating and awesome, to be sure, but that is exactly what the Lincoln Center Jazz Orchestra has undertaken in its endeavor to keep the majesty of Duke Ellington’s music alive. Although sometimes assailed for a perceived conservatism by those who equate anarchy and iconoclasm with esthetic quality or “progress,” the LCJO is actually maintaining an honorable and ancient tradition, as exemplified by man’s innate need to revere and perpetuate by ritual the memory of his ancestors.

The concert performance is being released concurrently with the publication of Jump for Joy, a 160-page, coffee-table-sized photo collection of Duke, replete with valuable text, a 37-date cross-country tour, and a May 12 PBS special documenting the occasion of the performances heard on this disc. Specifically, the program consists of eleven selections, ranging from the venerable “Black and Tan Fantasy” and “Mood Indigo” through the Swing Era classics, “Main Stem,” “C Jam Blues,” “Harlem Air Shaft” and “Cottontail” (which showcases guest tenorman Illinois Jacquet in marvelous form). Of slightly more recent vintage are “Happy Go Lucky Local,” “Multi Colored Blue,” with deep-toned vocalist Milt Grayson, “Chinoiserie,” “Bli Blip,” with Diane Reeves doing her Ella bit, and the closing “Portrait of Louis Armstrong,” a feature for leader Wynton Marsalis.

Throughout the course of the other arrangements, which cling remarkably close to the sound of the originals, we also hear more from Marsalis, as well as solos by pianist Cyrus Chestnut, growlmaster trombonist Wycliffe Gordon, roots-heavy altoman Wess “Warmdaddy” Anderson, and others of the sidemen, inclusive of trumpeters Seneca Black, Ryan Kisor, and Marcus Printup, trombonists Wayne Goodman and Ron Wesray, and reedmen Ted Nash, Walter Blanding, Jr., Victor Goines, and Joe Temperley. The time is expertly stated in swinging fashion by bassist Rodney Whitaker and drummer Herlin Riley. Admittedly lacking the passion, authority, and inventiveness of the original Ellington performances, it has to be said that the LCJO is, without further reservation, the next best thing around, with special emphasis to be placed on the last phrase. 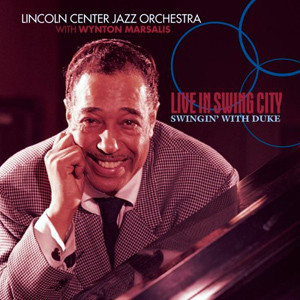