Marsalis Music and Redeye distribution are proud to announce the release of a rare new album by New Orleans’ own Marsalis family August 24, 2010 entitled “Music Redeems.” One of the most famous New Orleans’ multigenerational jazz families gathered together last June at the Kennedy Center in Washington, D.C. for a very special evening of celebration, appreciation, and performances as Patriarch, Ellis Marsalis received The Duke Ellington Jazz Festival’s Lifetime Achievement Award.

The incredible, sold-out concert was recorded by Marsalis Music and features performances from sons Branford on saxophone, Wynton on trumpet, Delfeayo on trombone, Jason on drums, poet Ellis III, and special guest, family friend Harry Connick Jr. The evening inspired lively performances of repertoire with special meaning to Ellis and the Marsalis Family, punctuated by family stories and anecdotes about growing up in New Orleans. “I’ve played for presidents and queens and every other thing- nothing made me feel better than seeing my name up there with the Marsalis’,” Harry Connick Jr. said of the evening.
It is no coincidence that “Music Redeems” will be out just days before the 5th anniversary of Hurricane Katrina as all proceeds from the album will fund community programming at the EMCM. The education center is the heart of the New Orleans Musicians’ Village community, and was conceived in 2005 by Branford Marsalis and Harry Connick Jr. in partnership with New Orleans Habitat for Humanity following Hurricane Katrina.

In conjunction with the Marsalis Family album campaign to support the music education center, Marsalis Music will launch an online campaign (www.musicredeems.com) based on this motto and theme, “Music Redeems.” Despite the damage inflicted by the storm and the recent challenges the city faces in response to damage from the oil spill, the culture of New Orleans still lies in its music; the idea of “Music Redeems” expands the project’s local New Orleans roots to a universal theme with which everyone can identify. The goal of the campaign is to highlight the transformative power of music, individually and collectively, by offering fans the opportunity to share their own stories of the redemptive power of music and the role it has played in their lives and read the stories of others.

“Having the Ellis Marsalis Center for Music named for me is more than an honor. It is also an opportunity to realize many of the dreams I have long held for the music and musicians of New Orleans,” said Ellis Marsalis of the music center. Construction of the Ellis Marsalis Music Center is scheduled to be completed in the late spring of 2011. The center will aim at fostering an environment for the great musicians of New Orleans to pass along their traditions to future generations.

THE ELLIS MARSALIS CENTER FOR MUSIC will be a 17,000 square foot community facility designed to provide residents of the New Orleans Habitat Musicians’ Village and their neighbors with a place to gather and to study, to perform, and to record music. It will include classrooms and practice rooms for the after-school music program and a 150-seat performance space with state-of-the-art lighting and sound. It will house a library of music and music related materials. Additionally, the Center will provide career development resources for established musicians. Music education will be the initial focus of the Center. But as the music program is solidified the Center will broaden the range of artistic disciplines performed and taught all with the parallel goal of using cultural enrichment as a tool for community development.

MARSALIS MUSIC is the creation of Branford Marsalis, one of the most celebrated jazz musicians of the past quarter century. Based upon his extensive experience as a saxophonist, composer , and bandleader, Marsalis recognized the need to form a label that allows a diverse array of musicians to document their best effort. Launched in 2002, Marsalis Music has focused primarily on jazz, with a roster featuring such promising new artists as Miguel Zenón and Claudia Acuña as well as Marsalis himself and such established stylists as Joey Calderazzo and Harry Connick, Jr.

The Marsalis Family in Washington 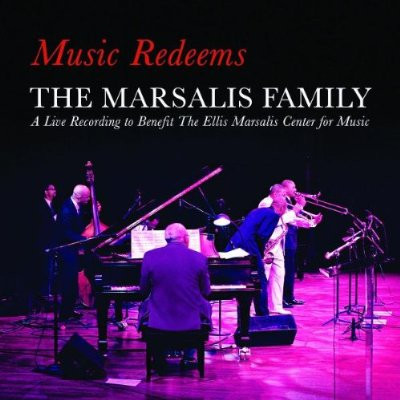