WYNTON MARSALIS has enjoyed an unusual relationship with the Blues Alley nightclub over the years. Not only has the jazz trumpeter recorded a live album there and conducted numerous workshops with the Blues Alley Youth Orchestra, but he continues to play in the Georgetown club every December even though he now has the commercial clout to headline at Wolf Trap and other theaters.

“Blues Alley gave me a chance to play back when I was 20 in 1980,” Marsalis explained in a recent phone call. “When I first got my own band together, I couldn’t get any gigs; I was only playing once or twice a month. Blues Alley gave me a chance, though, and they kept bringing me back even when I wasn’t selling many tickets. And then, eight years ago, when we sold a lot of tickets for the first time, they gave me more money than the contract had called for. That kind of integrity is very rare in the business, so I try to show some loyalty.”

“I first heard Herb when he was at Eastern High School,” Marsalis said. “I led a workshop there, and when Herb played, I was struck by how he could hear the harmonic form of a song at the same time he was improvising melodies. When a musician is 14 or 15, it’s hard for them to put the melody in the context of the form.”

Marsalis was speaking from his apartment in New York, and he reached over to his piano to play a little bit of “Pop Goes the Weasel.” He played the eight-bar melody through once and then started improvising notes in the right hand as his left hand played the chords. When he made the chord change for the seventh bar, he said, “Right there. That’s where most young musicians get lost. They get so deep in the melody that they can’t hear the change.

“It’s very seldom you hear a young musician who can play a melody through the harmonic form of a song. When you do, you know that’s someone who can play. So I kept track of Herb. He went to Florida A&M and studied with Marcus Roberts there. So when Todd Williams left my band, Marcus told me, ‘You’ve got to check out Herb.’ “

Much of the music that Marsalis is playing this week is drawn from the trilogy of albums titled “Soul Gestures in Southern Blue” and released this summer as three individual CDs: Thick in the South, Uptown Ruler and Levee Low Moan. These albums find the composer moving from the purist recreations of late-‘50s and early-‘60s hard bop into a more original sound featuring the bluesier, sexier, more playful feel of his hometown.

If the new trilogy reminds one of Marsalis’s 1989 breakthrough album, “The Majesty of the Blues,” that’s no coincidence, for the four albums were originally conceived as a set. In fact, he admits, “Thick in the South” was recorded in 1986; “Uptown Ruler” in 1987 and both “Levee Low Moan” and “The Majesty of the Blues” in 1988. So why are they only coming out now?

“Because all the albums have been backlogged,” Marsalis explained. “Even now we’ve got albums jammed up. We have five live albums recorded at the Village Vanguard over three years, ready to come out. There’s an album that features a long suite called ‘Blue Interlude,’ which we played at Wolf Trap last year. I’ve recorded soundtracks for a Charlie Brown TV show and for the ‘Shannon’s Deal’ TV series. I have a classical record done; it’s me and Kathleen Battle doing short pieces by Scarlatti, Bach and Handel. We’ve recorded most of a ballet called ‘Griot New York,’ which I wrote for Garth Fagan.”

Marsalis and his band played the music for the ballet live behind Fagan’s dancers at the Brooklyn Academy of Music last week. The story behind the collaboration goes back eight years to a time when Marsalis’s first band had broken up amid a public feud between the trumpeter and his saxophonist brother Branford, who had accepted an invitation to play with the pop star Sting. Fagan bumped into Wynton on the street, listened to his story and brought the despondent trumpeter to the gymnasium where the dance company rehearsed in those days.

“The whole company performed just for me for 45 minutes,” Marsalis recalled recently. “I was only 22 then and I wasn’t sophisticated about ballet, but I could tell that these people were serious artists and that their hearts were in the right place. Garth told me, ‘I know it’s tough out there, but you’ve got to stay with it and address this music, because it’s important.’ A lot of people helped me out back in the early days when I needed it, and that’s why those ties are so strong today.” 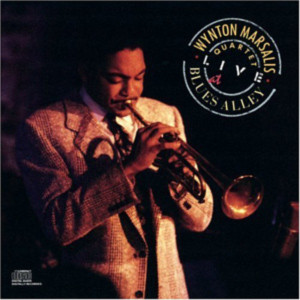