WaterTower Music is proud to announce the release of two versions of the song “Daily Battles” from Motherless Brooklyn, the film written, directed and produced by, and starring Edward Norton, and slated for release from Warner Bros. Pictures on November 1, 2019.

The song was written by multiple Grammy Award-winning artist Thom Yorke, who, along with his Atoms For Peace bandmate Flea (Red Hot Chili Peppers), performs a sparse and emotionally captivating version of the song. The second version of “Daily Battles” was arranged and performed by Wynton Marsalis, the Pulitzer Prize-winning, nine-time Grammy Award-winning jazz trumpet icon, who has been awarded the National Medal of the Arts and the National Humanities Medal, by two United States presidents. Marsalis, along with his hand-picked quintet of heavy-hitting-jazz-stalwarts, delivers an instant jazz standard version of the song that conjures images of the 1950s-era gin-soaked Harlem jazz club seen in the film.

Both songs are now available to stream and purchase. A Split 7” Vinyl configuration is set to be released October 4 and is now available for preorder

Norton described how the film’s music came together. “There’s a certain risk entailed in working with people you love and admire because, let’s face it, collaboration can get messy for all kinds of reasons” explained the Motherless Brooklyn director/writer/producer/star. “The safer choice is to stay a fan or a friend, protect the mystery of your favorite artists and keep marveling at the magic they make from a seat in the audience. But if you’re lucky enough to get to direct your own film, the allure of ringing up people whose work thrills you, well…. it’s irresistible. And if you’re really lucky…it all goes brilliantly, and you make some magic together. This is the bet I made when it came to dreaming up the music for Motherless Brooklyn. And what you’ll hear on this record is a mashup of the geniuses I rang up: Thom Yorke, Wynton Marsalis and Daniel Pemberton.”

It’s clear Edward Norton holds these musical icons in the highest regard. Regarding Yorke, he proclaimed, “No writer of songs from my generation has ever equaled Thom’s capacity for expressing the longing in the heart and the terror in the head at the same time; or for creating gorgeous melody within fracture and dissonance.” When describing Marsalis, he asserted, “A long essay would be needed to encompass the breadth of this man’s musical prowess, let alone what he has done to solidify jazz as America’s classical music.” Norton additionally bestowed high praise upon Motherless Brooklyn composer Daniel Pemberton (Steve Jobs, All the Money in the World, Ocean’s 8) “If there’s a more exuberantly protean talent than Daniel Pemberton working in film music today, I haven’t heard their stuff. He wrote what I’ll declare one of the best film scores of the last decade and within it two pieces that all the players who recorded them called ‘straight up classics.’”

Pemberton’s Motherless Brooklyn: Original Motion Picture Score album, an exceptional jazz foray unto itself, will have its own album release close to the date the film is in theaters, November 1.

The 10-track Motherless Brooklyn: Original Motion Picture Soundtrack will be available October 25, with the full album vinyl available in December. The album and the split 7” vinyl are both now available for pre-order. The track list is as follows

“’Round About Midnight”
Performed by Babs Gonzales

Motherless Brooklyn follows Lionel Essrog (Norton), a lonely private detective living with with Tourette Syndrome, as he ventures to solve the murder of his mentor and only friend, Frank Minna (Bruce Willis). Armed only with a few clues and the engine of his obsessive mind, Lionel unravels closely guarded secrets that hold the fate of the whole city in the balance. In a mystery that carries him from gin-soaked jazz clubs in Harlem to the hard-edged slums of Brooklyn and, finally, into the gilded halls of New York’s power brokers, Lionel contends with thugs, corruption and the most dangerous man in the city to honor his friend and save the woman who might be his own salvation.

Edward Norton directed, wrote, produced and stars in Motherless Brooklyn. The film’s journey to the screen began in 1999 when Norton saw the cinematic potential in Jonathan Lethem’s novel Motherless Brooklyn and its unforgettable central character. But from the beginning, Norton aimed to transpose Lethem’s contemporary characters into a different period and plot and give it a distinctive atmosphere by re-setting the drama in the 1950s—a time of great change in New York City.

About WaterTower Music:
WaterTower Music, the in-house music label for Warner Bros., has been releasing recorded music since 2001 and has released over 200 titles, including the soundtracks and scores to Aquaman, Crazy Rich Asians, Wonder Woman, Interstellar, Game Of Thrones, Westworld, Riverdale, The Hobbit Trilogy, The LEGO® Movie, The Dark Knight Rises, Hairspray, Sex and the City, Elf, and The Notebook, among others. 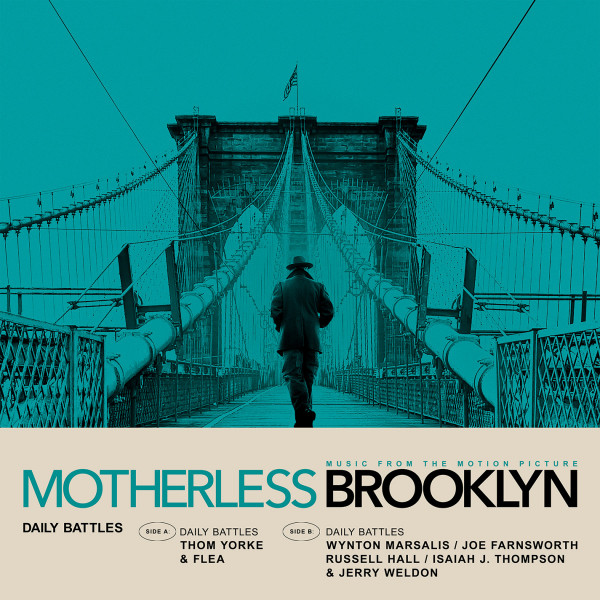