Lincoln Center’s Man With the Trumpet, With Orchestra

Just before the lights dimmed in the Rose Theater on Thursday night, a voice announced that while the use of cellphones was prohibited, hand-clapping, foot-stomping and cries of “Aw, yeah!” were all welcome forms of audience participation. It was a hokier introduction than one might have expected from a concert called “Wynton With Strings.” But in a way, it suited both subject and setting.

Wynton Marsalis has built his legend on the premise of an elevated yet approachable music – America’s Classical Music, let’s say, but also an incorrigibly down-home gumbo. His primary instrument, aside from the trumpet, has been the apparatus of Jazz at Lincoln Center, which employs him as artistic director in much the same way that Apple employs Steve Jobs as chief executive. “Wynton With Strings” arrived several days after the organization’s fall gala, a black-tie affair that celebrated Mr. Marsalis’s 25-year solo career, and reportedly raised nearly $2 million.

There’s a certain middlebrow pleasure in the soloist-plus-strings equation, which most famously yielded recordings by Charlie Parker and Clifford Brown. Mr. Marsalis’s Columbia albums in this vein – “Hot House Flowers” in 1984 and “Standard Time, Vol. 5: The Midnight Blues” in 1998 – self-consciously strove for a more harmonious marriage of orchestration and improvisation. The arrangements from those albums, by Robert Freedman, were the chief substance of the concert, which featured Mr. Marsalis with his quintet and a string orchestra conducted by Robert Sadin.

At best, the music fulfilled its implicit promise of romance. “For All We Know” and “Spring Will Be a Little Late This Year,” which both came in the stronger second half, provided Mr. Marsalis with vehicles for wistful Technicolor balladry, and he indulged without going overboard. “Stardust,” with its darkly tremulous arrangement, was even more powerful, and it elicited Mr. Marsalis’s most unassumingly virtuosic performance – though he was nearly eclipsed by the tenor saxophonist Walter Blanding Jr., who used Ben Webster’s crooning tone as a touchstone in the evening’s most gallant entreaty.

During other moments, an identity crisis appeared to take hold. “Guess I’ll Hang My Tears Out to Dry” was a hodgepodge, alternating between a chromatic pedal point and a strangely unrelated slow swing section. “Django” began with appealing grandeur but gave way to a basic blues. The orchestra and the quintet never felt like a single entity, despite the fact that Mr. Sadin, when he wasn’t sculpturing air with his hands, often turned to the band to stomp his feet (he’d heard the announcement) or approvingly grimace and grunt.

Such jubilation felt warranted on a pair of small-group pieces: Mr. Marsalis’s recent ditties “Free to Be” and “Big Fat Hen.” But several blasts from his past – “Caravan,” “Just Friends” and “Cherokee” – featured the strings in dimensionless arrangements that merely overlaid the quintet. Mr. Marsalis sounded as crisp and confident as ever; the bright young talent in his band seemed hampered by all the fuss. 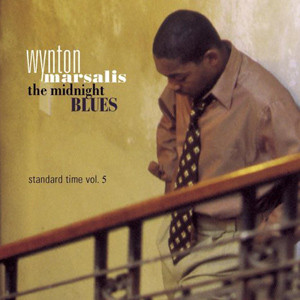