Although trumpeter Wynton Marsalis, who opened Thursday at the Westwood Playhouse, is one of the most visible and commercially successful jazz musicians, his creative juices haven’t been diluted.

His group, which performs through Sunday, played everything from New Orleans traditional to ’90s avant-garde, and played it extremely well, in a remarkably convincing expression of his belief in the continuing simultaneity of all jazz styles.

Appropriately, the opening, two-part work, “Death of Jazz” and “Happy Feet Blues,” re-imagined one of the music’s earliest scenes—a turn-of-the-century burial society band’s slow, funeral march to graveside, followed by an invigorating two-step back to town.

In the hands of Marsalis’ players, the dirge was reharmonized with teasingly elusive dissonances, and the two-step became a showcase for slipping and sliding, plunger-muted solos by Marsalis and trombonist Wycliffe Gordon.

Another set of interrelated pieces—“Psalm 26,” “Uptown Ruler” and “Down Home With Homey”—featured a section in 5/4 that illustrated that even this somewhat awkward rhythm can be made to swing.

As if to prove the point, drummer Herlin Riley played a lengthy, multitimbral percussion solo that, amazingly, never lost touch with the meter.

Marsalis was exceptionally generous with his musicians, urging Gordon, Riley, bassist Reginald Veal, pianist Stephen Scott and saxophonists Todd Williams and Wes Anderson into extended, and almost always excellent improvisations. Anderson, in particular, sounded like a potential major artist in his work on “Black Codes From the Underground” and a gorgeous, Charlie Parker-inspired reading of “Out of Nowhere.”

In his own playing, Marsalis sounded more vigorous, more outgoing, more eager to explore the far limits of his skills than he has in years.

Two ballads, “Star Dust” and “Embraceable You,” were astonishing. On the former, he played it straight, using slight, half-valve slurs as accentuation marks against his sweetly airy tone. On the latter, done as a spontaneous encore, he never articulated the original melody, preferring instead to soar through a series of variations that seemed to grow richer and denser with each chorus.

Marsalis’ most impressive work, however, came during a brilliant, unaccompanied solo that re-created the imagery and the impact of legendary New Orleans cornetist Buddy Bolden.

It was jazz playing that reached beyond improvisational variations and into the music as theater and ritual. 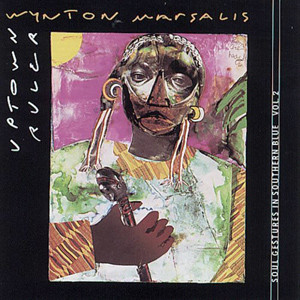