Turning from the Baroque trumpet, Wynton takes on two 20th century trumpet concertos by the French composers Henri Tomasi and Andre’ Jolivet, performing them in company with the London Philharmonia Orchestra and pianist Craig Sheppard. 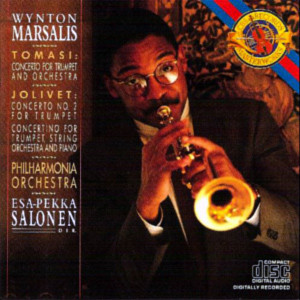 In his youth, the French composer André Jolivet (1905-74) was most affected by the music of Debussy, Ravel and Dukas, which he heard in Paris in 1919 at the Pasdeloup Concerts. Several years later he was impressed by works of Arnold Schoenberg and in 1929 by works of Edgard Varèse. Along with Olivier Messiaen, Jolivet in 1936 became a leader of the avant-garde group “La Jeune France,” which opposed the prevailing neo-Classicism of French composers of the 1920s and advocated “new” romantic principles. Uninterested in serialism or the refinements of Webern, Jolivet declared, “From the technical standpoint my aim is to liberate myself totally from the tonal system; esthetically it is to give back to music its ancient and original character as the magic and incantational expression of human groups. Music should be a sonorous manifestation directly related to the universal cosmic system.”

An earcatching characteristic of much of Jolivet’s music is its peculiar, even bizarre, blend of strong rhythm and unusual sonority (both sometimes carried so far as to suggest controlled chaos) with an overall emphasis on melody: Three of his best known concertos – for ondes martenot, for piano, and No. 2 for trumpet (finale) – are outstanding in this regard. Stravinsky’s Rite of Spring and Bartok’s ethnic neo-primitivisms seem not far removed from such music, although Jolivet’s has its own profile. Indian and Balinese music, Arabic chant and jazz are additional ingredients in the work of this determinedly eclectic composer, whose language was unusually speculative.

Jolivet once termed his Trumpet Concertino and Second Trumpet Concerto “my ballets for trumpet” – a reference, perhaps not only tot he fact that both scores have often been choreographed but also to the lively, even physical, nature of a good deal of their music. Each is a virtuoso display piece. The Concertino dates from 1948, a succinct, neo-Classically tinged work in four sections (Allegro; poco più mosso; Allegro molto; più mosso) that features, in addition to the trumpet solo, a formidable piano part. Highlights are the luxuriantly melodic slow music and the energetically rhythmic, “pop”-French finale.

Written in 1954, Jolivet’s jazz-influenced Trumpet Concerto No. 2 is scored for an unusual ensemble: two flutes, clarinet, English horn, two saxophones, piano, doublebass, and no less than fourteen percussion instruments. In the first movement (Mesto; Conciatato), a mournful, “wah-wah” prelude is followed by an aggressive polytonal dance, while the slow movement (Grave) is atmospheric and rather bluesy, with an arresting arioso in the muted trumpet. The brilliant finale (Giocoso) is raucously jazzy and primitivist, dominated by a simple, jovial tune set against polytonal and even tone-cluster accompaniments. As a centerpiece, there is a solo-percussion passage clearly affected by jazz devices.

In the early 1930s, Henri Tomasi (1909-71) was chief conductor of the French National Radio’s colonial network, reflecting his longstanding interest in various ethnic music. Tomasi’s orchestral suite Tam-Tam was a great success in 1931, and not long after, Florent Schmitt praised him as a musician “whose original, expressive ideas show inspiration and a bit of that lyricism besides, which is so rare in younger composers.”

Dedicated to the trumpeter Ludovic Vaillant, Tomasi’s Concerto for Trumpet and Orchestra was finished in 1948 and premiered in Paris in April 1949. The overall style of its three brief movements is best described as being neo-Classic in rhythm, melody and texture, echoing the composer’s declaration that “I like what is structured, clear and concise.” Perhaps the most striking elements of this brittle yet lyric piece are the opening movement’s trumpet cadenza with quiet snare-drum background and the jaunty cartoon-music finale.

While still in his early twenties, Wynton Marsalis has established himself as one of the world’s leading trumpeters in both the classical and jazz worlds. Praised as “potentially the greatest trumpeter of all time” by the famed classical trumpeter Maurice Andre, Mr. Marsalis made history in 1983 when he became the first artist ever to be awarded Grammys in both the classical and jazz categories in the same year. He achieved this honor again in 1984 by winning Grammys for his second classical recording of Baroque repertoire (with the English Chamber Orchestra and conductor Raymond Leppard) and his jazz album entitled “Hot House Flowers.” Since then, his record sales have been exceptional in both fields and he has been the recipient of several other top international awards, including a Grand Prix du Disque and an Edison Award.

The second of six sons of New Orleans jazz pianist Ellis Marsalis, Wynton grew up in a musical environment. He received his first trumpet, a present from Al Hirt, when he was six, but it was not until he was twelve that he began to study seriously. While in school in New Orleans, Wynton was already interested in both jazz and classical music and played in a variety of bands and orchestras, including two appearances at ages fourteen and sixteen with the New Orleans Philharmonic.

His musical studies took him to the Berkshire Music Center at Tanglewood when he was seventeen. At the close of the summer session, Mr. Marsalis received the “Harvey Shapiro Award for Outstanding Brass Player.” A scholarship to study at Julliard followed.

In the jazz arena, Marsalis continues to tour the world with his quintet and make special appearances with many of the jazz greats, including Art Blakey and the Jazz Messengers, Sarah Vaughan, Sonny Rollins and Herbie Hancock’s V.S.O.P. Quintet.

“The hot young conductor on the international musical scene is a cool, 26-year-old Finn who rejoices in the lilting name Esa-Pekka Salonen. You either know that name or you don’t, but once you have said it to yourself, it tends to repeat itself in your head like a chant or a nursery rhyme. And you’ll recognize it when you notice it again in music reviews and concert listings around the world.”

The above quote from the Paris Herald Tribune of May 22, 1985, is part of a review of a performance of Bruckner’s Symphony No. 6 with the Orchestre National de France that Esa-Pekka Salonen conducted as a last-minute replacement for 82-year-old Eugen Jochum. The tone of the review may be a little light-hearted but it is typical of the kind of genial acceptance the young conductor has been receiving in the music world since he made his debut with the Finnish Radio Symphony Orchestra in 1979.

Born in 1958, Salonen studied at the Sibelius Academy in Helsinki, where he specialized in the horn and in composition and conducting. In 1979, he went to Italy to further his study of composition under Franco Donatoni. During the 1981/1982 season he was guest conductor at the Finnish National Opera and began to establish himself quickly as one of the most notable of young European conductors.

In September 1983, Salonen made his London debut on only a few days notice, conducting Mahler’s Symphony No. 3 with the Philharmonia Orchestra in Royal Festival Hall. The event was literally an international music sensation. Invitations to conduct immediately came from Berlin, Paris, London, Los Angeles, Toronto, Philadelphia, St. Louis and Minnesota.

During the 1983/1984 season, he conducted fifteen performances of Bergs’ Wozzeck at the Stockholm Opera, and in February 1984 led the Finnish Radio Symphony on a tour of Australia. In August 1984, he conducted the Philharmonia at the Edinburgh Festival.

Salonen made a triumphant American debut with the Los Angeles Philharmonic in November 1984 and later conducted the Minnesota Orchestra and the National Symphony in Washington, D.C.

In January 1985 he became principal guest conductor of London’s Philharmonia, and that year also included a return engagement in Los Angeles, appearances with the Boston Symphony at Tanglewood, the Proms series in London, and his debut with the Berlin Philharmonic, conducting Nielsen’s Symphony No. 4. On his schedule for the near future: The New York Philharmonic, the Philharmonic Orchestra and the Detroit Symphony.

Does he, asked the Paris Herald Tribune reporter, ever imagine himself as a conductor at Jochum’s age, past 80?

“Sometimes, yes,” answered Salonen. “But the global situation is politically so problematic now. I think it’s common for people of my generation not to think about things 60 years ahead. We have to solve these problems first…A good artist always works for peace.”