Home» Discography» Listen to the Storytellers: A Trio of Musical Tales From Around The World

Listen to the Storytellers: A Trio of Musical Tales From Around The World

Everyone loves to hear a good story. Storytellers take us into worlds wondrous and unknown. They tell us how life is, was, and perhaps will be. Whether a story is ancient or new, scary, sad or funny, it’s even better when spoken out loud – yes, much better. Because when someone else tells the tale out loud, we can feel the storyteller’s love for the story. And for us, too. And that’s wonderful.
Music makers have their own ways of telling a story. They use melody, rhythm, and the sounds made by different instruments to bring out parts of a story that are sometimes hidden in the telling. Music helps us feel, understand, and remember what the storyteller is saying. It’s like ketchup on some French fries: they’re still French fries, but that ketchup makes us feel a different way about them.
But whether a story is told with words, with music, or with both, all we need to do is use our ears and our imagination. So let’s prepare to enter a magical world filled with witches and castles, escapes and adventures, transformations and tests of courage. Gather round now, and listen to the storyteller…
(check out the companion book to this album) 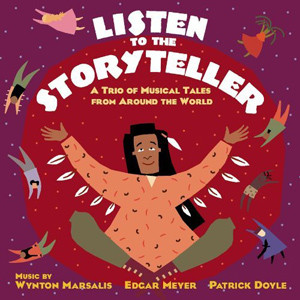 There once was an old man, and that old man, he had himself a son named Simeon. Together they lived in a little village on an island in a deep green sea.
Now Simeon was a good boy, but he had a mind of his own. Couldn’t tell that boy a thing.
“You got ears to hear with,” his father told him. “So you better listen good when you’re elders are talkin’ to you!”
Oh, but Simeon was a hard-headed child. He said, “Ears are good for lots of things ‘sides listenin’ to grownups!”
“Such as?” asked his father.
“Ears are good for listenin’ to music!” answered Simeon. “Like the music you play on your fiddle sometimes late at night, when you think I’m sleepin’.”
“What are you doin’ listenin’ to me play the fiddle?” asked the father.
“Well, I just want to learn to play the way you do,” answered Simeon. “Won’t you please teach me?”
But the old man would not hear of that. “Now look son, that’s no ordinary kind of fiddle,” he said. “It’s a magic kind of fiddle, and there’s no one but me can play it, or there’s going to be trouble, trouble, and more trouble.”

Now for all of its terribleness do you actually think that that boy cared anything at all about trouble? No indeed! He begged and pleaded with his father everyday. Finally the old man just got so tired of his naggin’ he gave in and let the boy pick up the fiddle.
Thing was, that fiddle had a mind of its own. So the first thing that came out when Simeon played was that same enchantin’ music he’d heard his father play so many times.
Now, Simeon loved that pretty music, but he couldn’t help wonderin’, where was the trouble, trouble, and more trouble? As soon as he started thinkin’ those thoughts, that fiddle started makin’ some mighty strange, bewitchin’ sounds.
When his father heard it, he came running, and snatched that fiddle away.
“Now listen to what I’m tellin’ you,” said the old man. “That’s the kind of music that will call out a witch just as sure as I’m standin’ here. Now don’t you ever go touchin’ my fiddle again, ‘less I tell you to.”
But that stubborn child wasn’t listenin’. He was too busy wonderin’ how that fiddle knew how to play what he was thinkin’.
Now Simeon tried to obey his father, but you know how stories go. The one thing the hero is not supposed to do is the very first thing he does. Simeon just couldn’t let that fiddle out of his mind.

No sooner had his father left the house one day, Simeon started to hear that old fiddle just callin’ out to him. He found it, took it up and started playin’.
Right away, the strangest things began to happen.
A fierce wind started blowin’. Dark clouds blocked the sun. Dogs actually began meowin’ and cats started to bark. All the neighbors rushed out of their houses to see what was causin’ such commotion, but then they stopped. There was a big grey cloud whirlin’ and twirlin’ and settlin’ down right in front of Simeon’s house.
Out of that cloud plopped the nastiest, stinkiest, dirtiest old witch you’d ever want to lay your eyes on. The neighbors gasped, and they moved back in fear, and even old Simeon had to stop his fiddlin’. Well, that witch walkd right up to him and said, “That fiddle belongs to me. Your daddy stole it from me long ago and I ain’t be able t dance my witch’s dance ever since. Now I aim to get it back!”
Well, that stubborn boy just looked at her, cool as a cucumber. He said, “My daddy is an honest man. If he got that fiddle from you, well he got it fair and square. And if you want it back, you’re gonna have to get it fair and square too!”
“Oh, foolish boy” said the witch. “If you can play that fiddle longer and stronger that I can dance my dance, I’ll let you keep it, and I’ll never show my face in these parts again.”

“And if I can’t?” asked Simeon.
“Then I’ll take back my fiddle and because you’re so sassy, I’ll take something else, too – your ears!”
The neighbors gasped, but that hard-headed boy answered, “You’ll never get my ears! I’m going to fiddle till you drop!”
And so the music started. And that mean old witch started in dancin’ as fast and as furious as any witch has ever danced.
Oh, the music got louder and louder, till even Simeon’s father could hear it way off in the cane fields. And he knew that that wild music could only mean one thing – trouble!
He took off for the village. When he got there he stopped dead in his tracks. He saw that nasty old witch dancin’ in his front yard, and Simeon playin’ the fiddle like a house on fire.
“Boy, you listen to me now,” Simeon’s father yelled. But Simeon was too scared to stop, for fear that he’d lose his ears. He just kept on fiddlin’, faster and faster, till that magic fiddle got so fiery it glowed like a red hot poker in his hands.
The old man saw that his son was lookin’ might tired now. But that old witch, she kept dancin’ and prancin’, whirlin’ and twirlin’, like she could go on all night.
So Simeon’s father did the only thing he could: he started clappin’ his hands and hollerin’ for Simeon to keep on playing.

Simeon was getting’ mighty scared now, and he started playin’ faster, crazier, and wilder than ever. And that witch was keepin’ up too, dancin’ and spinnin’ quicker and quicker till her feet sputtered with sparks and her hair stood on end. Then all at once, she spun herself around so fast she turned into a big whirlin’ tornado. She let out a scream, and kickin’ up a cloud of dust, she disappeared with a WHOOSH!
Simeon stopped fiddlin’. He felt for his ears, and grinned a grin from ear to ear to find that they were still there.
When the wind died down, the sun came out from behind the clouds, the old dogs stopped meowin’ and the cats stopped barkin’. The neighbors let out a big sigh, and cheered the boy for savin’ their town from the witch.

Old Simeon was so worn out he walked right over to his father and handed him the fiddle.
“You are one willful son,” his father said. “But I’ll tell you, that was the best fiddle playin’ I ever did hear.”
“That fiddle played whatever I thought,” said Simeon. “And I had to do some powerful thinkin’ to beat that witch. But lemme tell you something. I’ll never play that fiddle when you’re not around again, I promise.”
Simeon kept his promise, and that nasty old witch was never seen in those parts again. And ever since that day the children in the village on the island in the deep green sea always make sure to prick up their ears…and listen real good…whenever their elders say, “You got ears to hear with, so you listen to what I’m sayin’!”
You hear?

For this recording, 24-bit technology was used to maximize sound quality.
Dedicated to the memory of Miles Goodman.