Confirming that he would continue to be a force to reckon with in classical as well as jazz music, Wynton joins soprano Edita Gruberova and the English Chamber Orchestra, conducted by Raymond Leppard, for performances of a splendid range of Baroque masterpieces, including a ringing excerpt from Handel’s oratorio “Samson,” several haunting airs by Purcell, and the Fasch trumpet concerto. Winner of a 1984 Grammy Award. 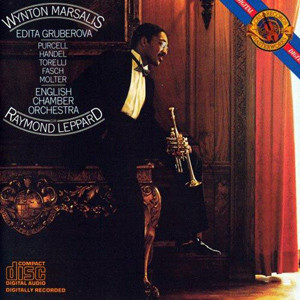 The greatest era for the trumpet was the eighteenth century, for then composers treated this most brilliant and triumphant of instruments with the admiration it deserved. Today the trumpet holds a fairly muted status as a member of the symphonic brass section, finding a real outlet for its talents in the world of jazz. But to hear the trumpet in all its ceremonious splendor one must go back to the era commemorated in these selections by Wynton Marsalis. (Oddly, Mr. Marsalis is as well known in the world of jazz as in the classical arena and is the first musician ever to win a major award–the recording industry’s “Grammy”–in both jazz and classical categories. His winner: An album of trumpet concertos by Haydn, Hummel and L. Mozart for CBS Masterworks.)

Few composers honored the trumpet more nobly than Henry Purcell, whose works are full of sections called merely “Trumpet Tune” or “Trumpet Air.” Purcell’s Ode for the Birthday of Queen Mary, 1694 (Come Ye Sons of Art) was the last in his series of birthday tributes to the queen, for the following year he was called upon to write funeral music for England’s monarch. “Sound the Trumpet” was a duet for counter-tenors, each imitating flowing trumpet lines on the words, “Sound the trumpet, till around…You make the list’ning shores rebound…To celebrate the glories of this day.”

King Arthur, or The British Worthy, had music by Purcell and drama by John Dryden, whose piece began as a celebration of Charles II, was rewritten to eulogize James II and rewritten still again to entertain William III. Surprisingly, the results were immensely successful, but much of Purcell’s music has vanished over the years, though this “Trumpet Tune” from the fifth act survives in the repertory of fine trumpet players.

The Indian Queen shares some of the same music as Comes Ye Sons of Art (Purcell, like other composers of the era, was economical and often stole from himself). Another Dryden/Purcell work, it began as a play in heroic verse before being reprocessed into an opera. Among the memorable remnants from that 1695 success are this “Overture,” “Entrada” and “Trumpet Tune.”

“Let the Bright Seraphim” is from Samson, the massive and powerful oratorio Handel created from John Milton’s Greek tragedy Samson Agonistes. Grandiose and somber, Samson accumulates tremendous intensity in its third act, then explodes in a brilliantly florid duet for an Israelite Woman (the character’s only appearance in the oratorio) and solo trumpeter. The piece is modelled along the lines of a Venetian-style bravura aria but works just as well as a solo exercise for virtuoso trumpet.

Like Purcell, Handel wrote tributes to the reigning British rulers of his day. “Eternal Source” is the duet (tenor, or alto, plus trumpet) form his Birthday Ode for Queen Anne, with these words: “Eternal Source of light Divine, with double warmth thy beams display…And with distinguished glory shine, to add a lustre to this day…The day that gave great Anna birth, who fix’d a lasting peace on earth.”

Giuseppe Torelli’s 28 trumpet sonatas were composed during his days in Bologna, Italy (where he died in 1709). The two heard here are examples of Torelli’s Sonate a 5 con Tromba (literally, sonatas for five instruments, or parts, with trumpet) and call for trumpet, strings and basso continuo.

Almost forgotten today is German composer Johann Friedrich Fasch (1688-1758), prolific and successful, who was admired by no less than J.S. Bach and thoroughly eclipsed by Bach ever after. None of Fasch’s music saw publication during his lifetime, and most of it still awaits analysis. But his concertos, among them this D Major for trumpet, a pair of oboes, string orchestra and continuo, are currently undergoing a revival and are admired for their freshness and curiously Italian flavor.

Johann Melchior Molter (about 1695-1765) is best known for his clarinet concertos, but he left nearly a hundred concertos for all kinds of instrumental combinations. Like Fasch, Molter looked to Italy for stylistic models, and the concerto Wynton Marsalis plays here (NO. 2 MWV IV, 13) is typically brilliant in the outer movements, but revolutionary in its songful solo treatment of the slow movement: previously, the trumpet retired in favor of some less noisy instrument when a singing, as opposed to a triumphant, quality was needed. In that, at least, Molter was ahead of his time.