For the original soundtrack of Bolden, in theaters this spring, nine-time GRAMMY Award winner Wynton Marsalis faced a nearly impossible task: bring fellow trumpeter and New Orleanian Buddy Bolden, widely considered one of the fathers of jazz, back from the dead. But on this album, Marsalis enthusiastically resurrects the bawdy, brassy sound of Bolden as no one else can, throwing a Big Easy party that romps through some of Bolden’s most beloved material. 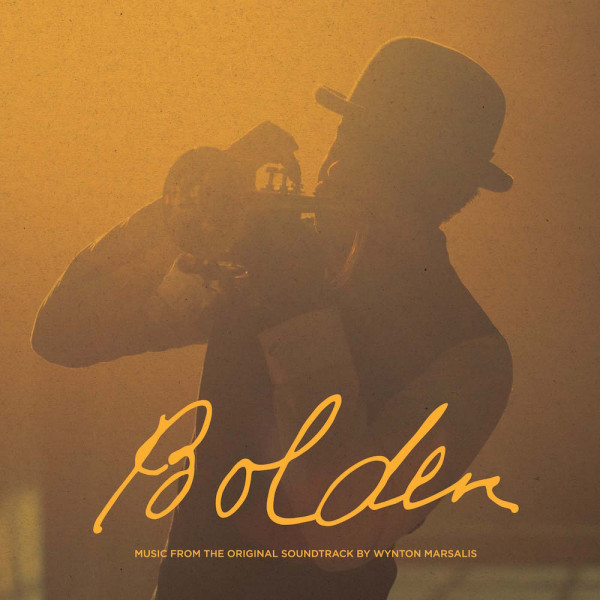 Charles “Buddy” Bolden (1877-1931) ranks among the most influential yet obscure figures in the pantheon of American music. This legendary New Orleans cornet player is widely credited by musicians of the era as being the first jazz musician and bandleader in history. Between the late 1890s and 1906, Bolden ignited a revolutionary style that blended melodic ideas, harmonies, and rhythms from the city’s rich legacy of African drumming and singing, European dance, military, and light classical dance music, along with Anglo, Afro-American and Caribbean folk styles. Jazz, as it came to be called, would define an important mainstream of American music in the 20th century.

Bolden’s highly personal approach to playing standard written marches, rags, hymns, and other popular songs featured individual and group improvisation and a celebratory jump rhythm that elevated the spirit of whatever it touched. At its inception, jazz was an exciting (mainly instrumental) dance music that satisfied the city’s traditional obsession with having a good time and also fulfilled local black folks’ quest to be heard and seen. They were seeking social justice through artistic truth and visibility through self-expression.

Jazz—with its characteristic freedom of expression and allowance for a diversity of ideas—was a living metaphor for the democratic existence being actively pursued through legal means. It is not coincidental that both the monumental Plessy v. Ferguson case and jazz began in the same city during the same era.

“King” Bolden was an underground legend and a hero in black community dance halls, public parks, and street parades. He left neither recordings (a mythical cylinder disc has never been found) nor a body of musical compositions. The press never celebrated him or acknowledged his popularity or his musical genius. The only time he was mentioned in the newspapers was when he was arrested for attacking relatives in 1906 during a psychotic fit. Less than a year later, he was sent to the Louisiana State Mental institution where he was confined until his death in 1931. Bolden was probably never consciously aware of how his innovative musical ideas had spread to thousands of musicians and countless fans throughout the world.

For all of his Promethean significance, there is a general vagueness about Bolden’s musical accomplishments and importance that underlies a broader, general misunderstanding of the early New Orleans jazz style. Even in today’s jazz world and music education circles, early jazz is often viewed as either a simple two-beat, three-chord, embryonic form, or as the fast, loud, spiritually bland and showy “Dixieland” that is better known and promoted in the United States. For some, New Orleans jazz is wrongly considered a limited repertoire of simple songs, like “When the Saints Go Marching In” or “Bourbon Street Parade,” that can be played in any style—often resulting in a predominant modern jazz (post-bebop) or funk sound. It is also now popular in real and makeshift brass bands and as a noisy rabble of talented kids “from the hood” blowing short melodic phrases uncontrollably into brass instruments and pounding on drums for tips from oblivious tourists. However, there is also a growing movement of authentic players of all ages from around the world.

My over-40-year immersion in the jazz culture of my native city has provided awareness and clarity: New Orleans jazz is not a set of songs, but a style or approach that can be applied to songs of different genres. Its musical principles can be endlessly used for creative original expression within the tradition or for the creation of entirely new music. The real New Orleans jazz sound, although fun and danceable, is very spiritual. It is a moving, communal experience that can bring about feelings of joy, freedom, and uplift—as well as sadness and reflection. It expresses the full gamut of universal human passions and emotions with a sense of conviction and truth.

As an upstart jazz clarinetist, I was fortunate to play with dozens of musicians who were actually born between the late 1890s and 1910. They definitively and repeatedly outlined to me the main characteristic of the New Orleans style: “Find your own tone and expression! That represents YOU!” This affirmation of personal identity was the most important statement in early jazz against African Americans’ imposed social invisibility. Indeed it is amazing how each musician—whether a trained reader or a self-taught ear player—had such a rich, singular musical identity as personal and discernible as one’s own voice, facial features, or handwriting.

This soundtrack is a fitting accompaniment to the first ever feature film about Buddy Bolden. The 26 songs feature a comprehensive mix of tunes associated with Buddy Bolden, classics and new arrangements of jazz songs recorded by Bolden’s greatest musical descendant Louis Armstrong, and Wynton Marsalis’s original compositions mainly in those styles.

Most of the songs are performed by a seven-piece band configured like Bolden’s, with the cornet playing lead melody, melodic improvisation, and solos; a growling, punctuating trombone filling in the bottom counter-melody; two clarinets (pitched in C and Bb) playing parts in octaves and improvising fills; and a steadily driving rhythm section consisting of guitar (or banjo), bass, and drums.

The Armstrong songs are largely drawn from the early 1930’s classic swing band recorded by the New Orleans trumpet king who redefined American music in the 20th century. They feature a 10-piece orchestra using the vocabulary and devices of that time: riffs, breaks, call and response, solos, shout choruses and a four beat pulse called swing. If you would like to hear the stylistic differences between the two ensembles, listen to both versions of “Timelessness” back to back.

Wynton Marsalis was the right choice for making Bolden’s soundtrack. He has an authoritative understanding and command of this demanding music in every aspect: playing, composing, and arranging. His deep knowledge of the music of his native New Orleans is reflected in how his trumpet playing expresses that proud, joyous, and defiant singing spirit that has descended from Buddy Bolden to Bunk Johnson and King Oliver to Louis Armstrong and all of the great players in this line, including Terence Blanchard, Nicholas Payton, and Wynton himself. In his playing, composing, arranging, and band-leading, he captures the spirit and flavor of both Armstrong and Bolden without sacrificing his own personal integrity and creative imagination.

This recording inspires us to imagine Buddy Bolden’s life, music, and era. It calls to mind the years I spent in the 1970s as a brass band clarinet player in dozens of black social club second line parades, jazz funerals, and church parades—many in Buddy Bolden’s uptown neighborhood, where his spirit was still felt. Many of these (largely unpublicized) events would draw hundreds of community members who would follow alongside for hours doing the free-form second line dance that encouraged and paralleled the freedom, excitement, and creativity of the hot brass band jazz style.

It is hard to know what Buddy Bolden would have thought about all the fuss made over his music and about being the subject of a feature film. Until this film, he had only been the focus of one biography and a couple of books. Whether he would have liked the attention or not, he certainly would have been pleased that over 100 years after he stopped playing the style that he innovated, it is still being heard in many different forms, serving as an important musical challenge and source for experimentation and artistic creation. The music on this soundtrack does Bolden’s memory and legacy justice with a type of integrity that is long overdue.

Dr. Michael White has been a clarinetist in the New Orleans jazz tradition for over 40 years. He remains active as a performer, composer, bandleader, and jazz historian. He has a Ph.D. in Spanish and currently teaches African American Music at Xavier University of Louisiana in New Orleans, where he holds the Rosa and Charles Keller, Jr. Endowed Chair in the Arts and Humanities.