Swing into the holiday spirit with BIG BAND HOLIDAYS II, the sequel to the critically acclaimed 2015 release from the Jazz at Lincoln Center Orchestra with Wynton Marsalis. Featuring original arrangements of holiday classics selected from Big Band Holiday concerts spanning from 2015 to 2018, nine-time GRAMMY Award winner and Pulitzer Prize winner Wynton Marsalis and the JLCO are joined by an all-star assortment of guest vocalists, including Veronica Swift, Denzal Sinclaire, Catherine Russell, Audrey Shakir, and the Queen of Soul herself, Aretha Franklin.
Franklin’s stirring solo piano rendition of “O Tannenbaum,” a surprise performance during the 2015 edition of Big Band Holidays, has never before been released. Other standout tracks include Veronica Swift’s vibrant recording of the classic “(Everybody’s Waitin’ For) The Man with the Bag” and Denzal Sinclaire’s jazzed-up version of “We Three Kings.” An instant classic that captures the magic of an annual NYC holiday tradition, BIG BAND HOLIDAYS II serves up timeless nostalgia just in time for the most wonderful time of the year. 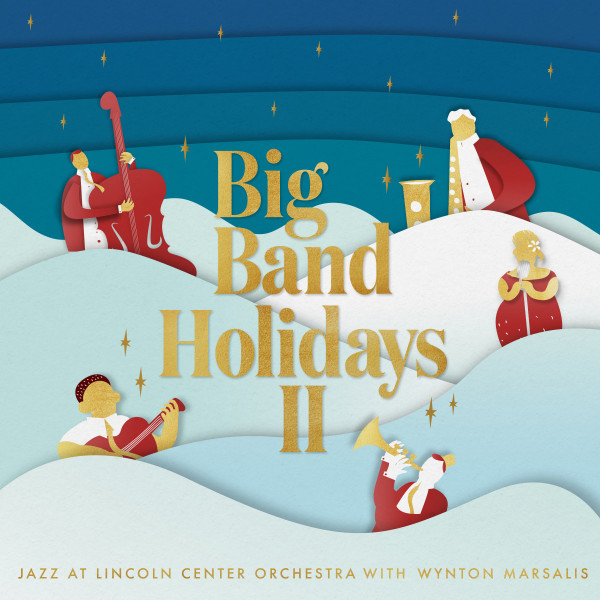 For each Big Band Holidays tour, the orchestra members work hard to arrange classic holiday songs that we then collaborate on with great singers.
I’ve enjoyed every moment of arranging some of those songs, including “Sleigh Ride,” “Winter Wonderland,” and “Brazilian Sleigh Bells.” The tour is a time when we reflect on a successful year and get ready for the ensuing year of music.
Without fail, it also calls to mind the JLCO members who are no longer witp. h us. Joe Temperley is one whom I always think of during the holiday tours. He made us happy with every moment of his sound and his wry humor, keeping our spirits up during long tours.
The holiday season is about family and soulful music—it doesn’t get any better!

One would think coming up with a Big Band Holidays show would be as easy as writing a letter to the one and only Santa Claus. Come up with a few Christmas carols and play them, right? If only it were that simple. We arrange, orchestrate, conduct, and play all kinds of Christmas tunes, from the simplest and catchiest to the obscurest and hardest. Sometimes, we get tunes assigned to us that even the oldest human being on Earth is unaware of.
Nevertheless, each arrangement is prepared and played as if we were the original composer. Take Vincent Gardner’s arrangement of “What Child Is This?” He specifically wrote it for gospel songstress Kim Burrell, but Cécile McLorin Salvant put her own tasteful spin on it to complement Gardner’s intricate arrangement. That was one of those moments that made us realize that our ensemble has an embarrassment of riches that we sometimes take for granted.
There’s no shortage of tunes that we’ll perform for any audience; Christmas brings the best and worst out of people, and we bring those feelings to fruition when we perform on the road and in New York City. A good way to enjoy this album is to treat each arrangement like a Christmas present. I hope you enjoy listening to Big Band Holidays II like we enjoyed playing and arranging the music.

I enjoyed working with the JLCO because it was a major challenge to keep up.
The JLCO presents music at high levels of excellence and complexity. Each band member has skills and imagination both deep and wide. My challenge was to try and reach the level on which this orchestra functions. I needed to hit the mark every time. I was challenged every time I opened my mouth, and the orchestra both pushed and supported me in my efforts.
The Big Band Holidays Tour is a high point of my musical life.

It is not only a dream come true to be on this album and to have done this tour with the Jazz at Lincoln Center Orchestra, but it also feels like a homecoming. For me, this music is literally my roots, and to have the opportunity to share this music’s spirit during the time of the year when peoples’ spirits are at their highest felt like a dream. Then, to be in Rose Theater—the “House of Swing”—in the heart of New York, performing the music of Christmas, redefined my meaning of the phrase “holiday spirit.”
As we grow older, we are always trying to capture the magic we felt as children; and, for the first time in my adult life, I felt that magic, and I think we spread it around for all to feel.

It’s a dream-come-true to sing with Wynton Marsalis and JLCO! There is no better jazz orchestra in the world. To me, there is nothing better than combining new big band arrangements with songs associated with the holiday season. I was asked to bring tune suggestions, and found total collaboration with the arrangers within JLCO. Each arranger wanted to make sure I was happy and comfortable as we moved forward. We also had fun on stage, and there was a good feeling all around.
During our tours and concerts in New York City at Rose Theater, I would stand at the side of the stage for every show, in between my songs, to soak up every note!
I love the collective sound of JLCO and the Big Band Holidays program. BBH concerts bring people together. There’s something for everybody–all ages and cultural backgrounds. The musicians really take care of the audience with love. The experience was one of the highlights of my career!

1. It’s the Most Wonderful Time of the Year

6. (Everybody’s Waitin’ for) The Man with the Bag (ft. Veronica Swift)

7. What Will Santa Claus Say? (When He Finds Everybody Swingin’) (ft. Catherine Russell)