Home» Discography» Accent on the Off Beat

Accent on the Off Beat

Accent on the Offbeat is a cinema vérité film about the creation and premiere of the ballet Jazz (Six Syncopated Movements), composed by trumpet virtuoso Wynton Marsalis and choreographed by Ballet Master in Chief Peter Martins of the New York City Ballet. A focus of the film is the remarkable contrast – in background, temperament, style and creative approach – between Martins and Marsalis as they unite the disparate worlds of ballet and jazz. 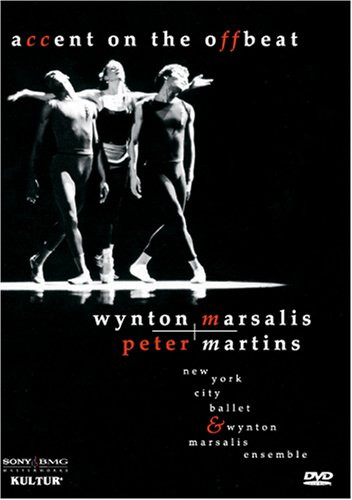 ACCENT ON THE OFFBEAT
They are a study in contrast: Wynton Marsalis is a jazzman from New Orleans, someone whose art turns on improvisation; Peter Martins is a ballet master trained in the grand European tradition, a choreographer whose work involves a magnificent formality and precision. When Martins commissioned Marsalis to compose a ballet score for his company, the New York City Ballet, neither artist knew exactly what the result would be. This remarkable film -Accent on the Offbeat – by the Emmy Award-winning team of Peter Gelb, Susan Froemke and Albert Maysles, documents Martins’s and Marsalis’s creative reckoning with each other as artists, individuals, and masters of very different forms. As producer Peter Gelb comments, “Vérité films are fascinating to make because they are so unpredictable. This particular film was meant to be about a smooth collaboration. But, in fact, what drives it is the creative tension and artistic struggle that develops between the worlds of ballet and jazz.

It is ultimately about a test of wills between Martins and Marsalis.”
Reflecting on the nature of his collaboration with Martins, Marsalis remembers something his father once told him: “Learn how to work a job, son,” the elder Marsalis, also a jazz musician, had said.

The choreographer and the composer first met aboard the private jet of a mutual friend and immediately became excited about the possibility of working together. But it took more than a year for two directors of resident Lincoln Center companies (Martins is Master in Chief of the New York City Ballet, and Marsalis is Artistic Director of Jazz at Lincoln Center) to sit down together to sketch out their plans.

A passionate jazz fan who, as a teenager in Denmark, listened to “Dizzy Gillespie, John Coltrane, Miles Davis, Louis Armstrong, you name it,” Martins saw his collaboration with Marsalis as a chance to pay homage to his adoptive country: he envisioned a work that would
personify America, its history, landscape, and spirit.

Martins asked Marsalis for six movements, with the march serving as the rhythmic center of the score. “He had listened to some of my recordings,” remembers Marsalis, “and picked out the types of marches he wanted. One was like a New Orleans march, a street parade march. Another was a dirge, another was a toy soldier march, 6 and the other was like a ragtime march. For the other two movements, he wanted one that dealt with romance and one that dealt with some symbol of American life. I picked the train because it is an important part of the American landscape and mythology.”

Newsweek called the result. Jazz (Six Syncopated Movements), a work of “brash good humor,” a “raucous pastiche of jazz traditions, from jubilant marches to the wailing of a New Orleans funeral procession.” As for Martins, though dubious at first, he now (after many hearings) considers Marsalis’s creation “unique… different from Wynton s other music – it’s very jazzy, but I think it’s also more classical than his other stuff. And what he’s done is very dancy.”

As Marsalis points out in a conversation with New York television personality Charlie Rose (an excerpt of this interview appears in the film), “Jazz music is dance music….The earliest forms of jazz are named for dances like the Charleston, Cake Walk, Shuffle, Slow Drag.” In the Stagebill for the New York City Ballet production, Marsalis said, “Jazz music was born in movement…. You don’t have to make a transition to deal with movement if you’re a jazz musidan. The drums and the bass are the heart of the jazz band, and they’re designed to play purely for dance.”

In 1991 Marsalis composed the music for a modern dance company when he worked with Garth Fagan on the much-praised Griot New York. His collaboration with the New York City Ballet was very different, however. As Martins explains, “It’s called Jazz, but understand that there is very little improvisation.” Though Marsalis’s compositions are often quite long, Martins insisted that this work be limited to a half hour. “Just as long as it was thirty minutes,” Marsalis tells us, “Peter knew it would be okay.” Exact timings were specific for each movement. But because Marsalis was dealing with motion, there are many changes in mood and tempo throughout the work. These changes, which tended to tax the dancers, were often a source of friction between choreographer and composer.

For Marsalis, one of the most interesting parts of the experience involved watching Martins teach the dancers their steps. “It’s like how a jazz musician learns a solo,” he says, “because he conceives of the steps and then he gives them to the dancers; they watch and they imitate, and if they don’t get it, they do it all over again.”