This incredible book of well known “Standards” contains complete note for note transcriptions and piano reduction of the combo arrangements from some of Wynton’s Grammy winning Performances. These New editions, which have been meticulously edited by Wynton himself, are provided in both score form and also with a separate pull of section for the soloist. (Note: There is no CD with these books). 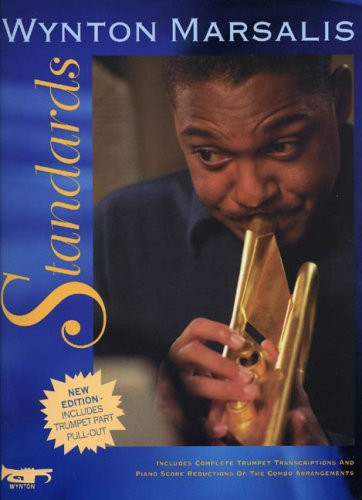 Interpretations of jazz standards from the genre’s leading contemporary trumpeter. Introduced and edited by Wynton himself. Titles are:

Jazz music and the American popular song were born just before the turn of the twentieth century. They have the same parents – Ragtime and Blues. Both speak a common melodic language descended from the minstrel show, the fiddler’s reel, the work song and the spiritual. Both possess a harmonic vocabulary in the tradition of the great J.S. Bach. And, both make extensive use of devices developed in musical theater houses from La Scala to Lu Lu White’s.

Legend has it that the first jazz musician was Buddy Bolden. His repertoire consisted of original and blues songs, yes; but he was known and loved for his versions of popular songs and dance tunes. As the art oÍ jazz began to define itself, the practice of “jazzin”’ a popular song became as important as swinging the blues. As the American popular song evolved, composers like Hoagy Carmichael and George Gershwin increasingly incorporated more of the swing and feel of iazz. As a matter of fact, Mr. Carmichael’s “Stardust” is said to be derived from an improvised solo of jazz cornetist Bix Beiderbecke.

In the late 1920’s and early 5O’s, the masterpiece recordings of trumpeter and singer Louis Armstrong changed the relationship of jazz to the popular song. He had the ability to construct coherent improvised solos, which applied the musical implications of the blues to the more sophisticated harmonies and modulations of the popular song. This showed iazz musicians everywhere that the popular song could be used as thematic material for improvised variations. Because Armstrong was also a masterful singer, he cut and pasted lyrics into a collage of powerful, syncopated modern music, inspiring generations of singers as well.

From the turn of the century to the late 1950’s, thousands of songs were coming from musical theater, films and Tin Pan Alley. Jazz musicians sifted through this mountain of material to find the best songs. They loved to play recognizable song because it provided a common ground between musician and audience.
It still does. That someone could hum or sing along m-ade the improvisation easier to follow and understand, In some instances a particular rendition of a popular tune became a musician’s “signature” song, such as Coleman Hawkins’ “Body and Soul,” John Coltrane’s “My Favorite Things,” Miles Davis’ “My Funny Valentine,” or Tommy Dorsey’s “l’m Getting Sentimental Over You.” Musicians loved to find different ways to play these songs, from Lester Young’s wispy melodic improvisations to Art Tatum’s virtuosic runs and complete reharmonizations. There was even a style of jazz composition which fitted the harmonic structure and form of popular songs with jazz melodies, like Charlie Parker’s “Ornithology” based on Morgan Lewis’ “How High the Moon” and the two million tunes written to Gershwin’s “l Got Rhythm.”

Now these songs are called standards. They have been played in some form by every iazz musician from Jelly Roll Morton to Marcus Roberts. The playing of standards is an essential part of the modern jazz musician’s development. The melodies teach us how to sing through our instruments, The harmonic progressions guide us through the many tiered structure of our 12 keys. And, most importantly, many of these songs place us in the topsy-turvy world of love and romance with its exceptions, triumphs, its humor and failures. These songs are our heritage. They can be arranged, reharmonized, rephrased, syncopated, swung, crooned, or just simply stated without losing their identity and charisma. They are standards and they need to be played with soul. Yes. And swing.