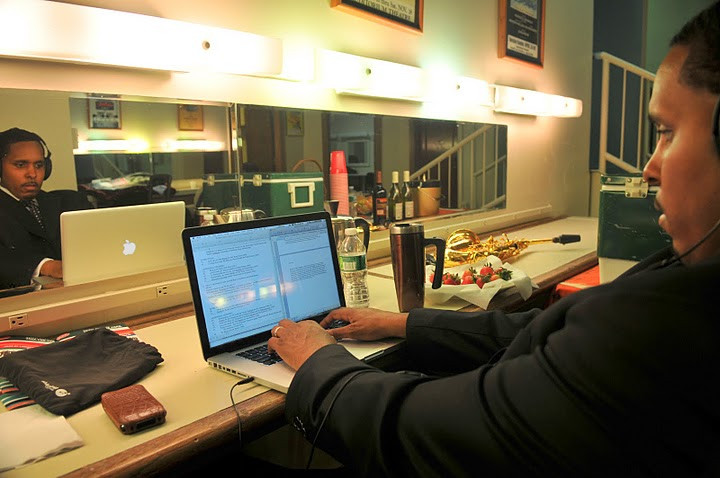 We are playing in a different city every night now with hundreds (and hundreds!) of miles in between. Ernest Gregory grabbed these pictures while we were in Oxford, OH. Before the concert I had a quick dinner consisting of what the band had not devoured from an hour earlier: Alphabet soup, chicken alfredo, and some black coffee. While eating backstage I met a 13-year-old who loves Charlie Parker and heard an 11-year-old trumpet player get all over a Louis Armstrong solo while his proud parents (who had just drove 3 hours after school) stood near. Once the rest of the band arrived to the venue looking clean we were ready to hit. There were well over 1,000 people at the show in this college town that only has a full-time population of about 7,000. At intermission, I was able to coerce Walter Blanding into playing another game of chess…which he lost! After the gig there were hundreds of people congregated to meet us. Dozens of high school students had driven two hours each way on a school night, old friends were catching up with us, and patrons of the arts were discussing recordings we had done some 15 years ago that I thought were lost. I even overheard Ted Nash discussing Architecture with a college student, and Marcus Printup reminiscing with the local trumpet professor who facilitated the International Trumpet Guild Jazz Competition in 1990 when Marcus won… Some of the guys were trying to scope out “where’s the party?!” The night ended with a heartfelt “goodnight” from the dedicated presenter while we loaded into the shuttle bus to go back to the hotel, pack up and travel through the night……..again.