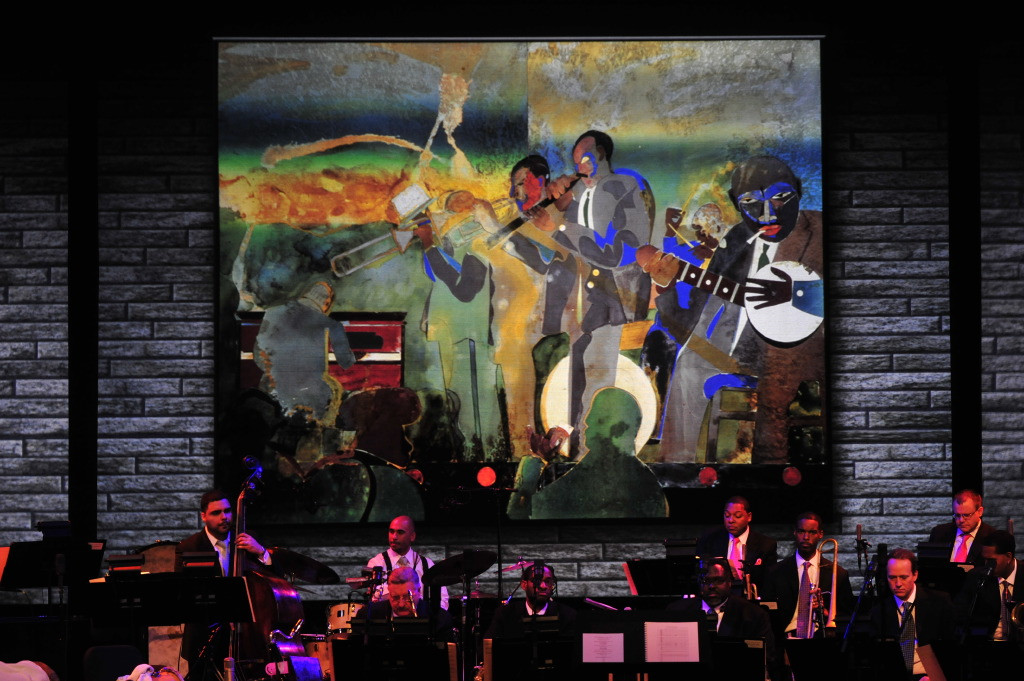 Last night the House of Swing was brimming with activity. Wessell Anderson had Dizzy’s overflowing with soul in 3 smoldering sets with Jeff “Tain” Watts on drums, Marc Cary on piano and Neal “sugar” Caine. In Rose Hall we premiered 7 new compositions and reiterated the significance of Ted Nash’s “Portrait in Seven Shades”. This concert featured an expressive large screen installment of great art projected and programmed by Brian Beasley. It was like going to a museum with giant moving paintings, to a movie, and to a concert at the same time. Imaginatively titled “Jazz & Art” it featured new music by Bill Frissell (to the art of Winslow Homer), Chris M. Crenshaw (Romare Bearden), Doug Wamble (Stuart Davis), Vincent Gardner (Sam Gilliam), Tim Armacost (Piet Mondrian), Papo Vasquez (Wilfredo Lam), and Sherman Irby (Norman Lewis).

The music preparation staff led by Kay Niewood did their typical stellar ‘far beyond the call of duty’ job. Eric Wright surpassed all expectation chasing down all the art on very short notice. The cats continue to amaze me. They learned some very difficult and diverse music with many cues and no conductor (with the exception of Papo who conducted his piece) and performed on a very high level in just 3 days of rehearsals. When it comes to executing complex new productions of music of the highest quality with a short lead time, I don’t think there’s ever been anything like the entire Jazz at Lincoln Center team.
The halls were packed and a great time was had by all except those who enjoy not having a great time (so even they were happy).
Here are some pictures shot by the great Frank Stewart.