Any thought that the leaders of New York’s bid for the 2012 Olympics would try to charm the International Olympic Committee’s evaluation commission with understatement exploded last night, on Wednesday 23, along with the fireworks arcing over Columbus Circle.

NYC2012 mustered every bit of glamour it could manage, entertaining the 13 members of the commission with aperitifs, A-list celebrities and a performance by Wynton Marsalis at the JALC’s Allen Room, then dropped a curtain to reveal the entrance to Central Park, where fireworks lit the clear, cold night.

Afterward, the commissioners were whisked to Mayor Michael R. Bloomberg’s house for an equally star-studded dinner, where the guest list included Meryl Streep, Whoopi Goldberg, Henry Kissinger and the artists of the moment, Christo and Jeanne-Claude. They shared a classic American meal of roast turkey and cornbread stuffing and a dessert of Statue of Liberty cookies, while Paul Simon serenaded them.

The Jazz at Lincoln Center performance featured dancers and Broadway performers, clips of hundreds of movies filmed in New York, everything from “West Side Story,” to “Ghostbusters,” to John Travolta strutting to “Saturday Night Fever,” which drew a roar from the audience. 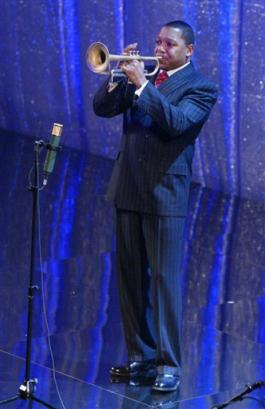