NEWPORT, R.I. – Dave Brubeck and Wynton Marsalis have often crossed paths over the years, but at this year’s JVC Jazz Festival-Newport, the two jazz stars finally got a chance to perform together.

On Saturday, Marsalis’ quintet played a set of tunes from last year’s album, “The Magic Hour,” and the trumpeter returned on the festival’s closing day to sit in with Brubeck’s quartet for two tunes.

Marsalis’ trumpet warmly caressed the George Gershwin ballad “Embraceable You” – enhanced by Brubeck’s sensitive piano accompaniment. And they surprised the audience by closing the set not with the Brubeck quartet’s signature tune, “Take Five,” but with a rollicking version of the Duke Ellington Orchestra’s theme, “Take the ‘A’ Train.”

That drew a standing ovation from the crowd filling the field in front of the main stage set against the stone walls of the 19th-century Fort Adams, punctuated by horn blasts from fans in their boats anchored in Narragansett Bay.

“We’ve seen each other a lot of times, but it’s the first time we had played … and it was great,” Marsalis, 43, told The Associated Press after Sunday’s set. “Nobody really plays like Dave now. … It was warm and down-home and just felt good.
“I’ve always loved Dave as a man and as a musician … he’s always just a gentleman, a man with a dignity.”

The 84-year-old Brubeck, who has performed at the Newport festival more times than any other musician over the past half-century, said he and Marsalis found an instant rapport.

“We immediately gelled and we both were hearing things together and feeling the beat together,” said Brubeck, who is composing the missing portions for four sections of Mozart’s “Mass in C Minor” on a request from the Pacific Mozart Ensemble. “We both had a wonderful ball … it was a fun, enjoyable musical experience.” 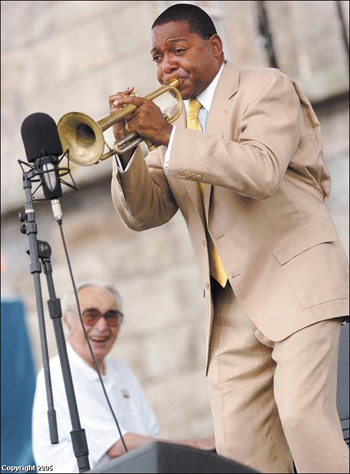 Photo by: The Associated Press/Jacqueline Marque