A Veritable Feast of Music for Christmas

The holiday pattern is by now familiar. While the networks gorge themselves on Christmas movies, public television sings itself hoarse with music specials. Anything with Luciano Pavarotti, apparently, is considered fail-safe. Tonight’s schedules alone include: “A Christmas Special With Luciano Pavarotti” on Channel 21 at 7:30 and Channel 13 at 10:05; and “Pavarotti in the Park,” on Channel 21 at 10:40. The one-man feast threatens to become a glut.

Viewers reaching the saturation point, no doubt temporary, will welcome tonight’s “Carnegie Hall Christmas Concert,” taped just three evenings ago and being edited down to the wire. It will be shown tonight at 8 on Channel 13 and at 8:45 on Channel 21. The occasion’s impressive scope is established in the opening salvo, a performance of “Mary’s Boy Chile,” its infectious Caribbean rhythms wending their way through all the islands of talent artfully arranged on stage disks that appear to be floating around the center core: the Orchestra of St. Luke’s, conducted by Andre Previn.

In the lineup are the soprano Kathleen Battle, the mezzo-soprano Frederica von Stade, Wynton Marsalis and his septet, the harpist Nancy Allen, the American Boy Choir and the Christmas Concert Chorus directed by Robert De Cormier. For this concert, and obviously for the television cameras, the back of the stage has been covered with three huge winter-themed panels, designed by John Michael Deegan and Sarah Conly and inspired by Russian lacquer boxes. Unusual touches, indeed.

But in the end, listeners are left with a Christmas concert and that means lots of familiar material. Some might be a little too familiar. Am I the only person in New York who, after sitting through hundreds of ornate renditions, finds “The 12 Days of Christmas” numbingly tedious? Mr. Previn, however, buttressed by a good many newly commissioned arrangements, manages to infuse many of the standards with fresh vigor.

In one unusual and highly effective segment, shared by Miss von Stade and Miss Battle, several of the traditional American songs focus on the figure of Mary: “Mary Had a Baby,” “Oh Mary, What You Gonna Name That Pretty Little Baby?” “Who Was Mary?” and “Sister Mary Had-a but One Child.” Mr. Marsalis, who punctuates this grouping with the soulful wailing of his trumpet, then leads the way to joyous ensemble performance of “Go Tell It on the Mountain.”

Dressed in a striking red gown, with sleeves puffed up to a size guaranteeing that no one will get within two feet of her, Miss Battle is quite dazzling in her upper registers and gets there often enough to make sure no one forgets it. In a very unfussy green gown — the Christmas colors are down pat — Miss von Stade, a touch too restrained with the spirituals, is at her most effective with such hymn standards as “O Holy Night.” As it began, the concert ends splendidly, offering a rousing “Angels We Have Heard on High” that gets a deserved standing ovation.

Peter Gelb (“Kathleen Battle and Jessye Norman Sing Spirituals”) is the executive producer. Brian Large, noted for most of the Metropolitan Opera telecasts, is the director of this “Great Performances” presentation, a CAMI Video Production made in association with Thirteen/WNET. If planning to tape the broadcast, be advised: because of pledge-week breaks, the 90-minute concert will be spread over two hours.
A stereo simulcast with be carried on WQXR, 96.3 FM, at 8 P.M. 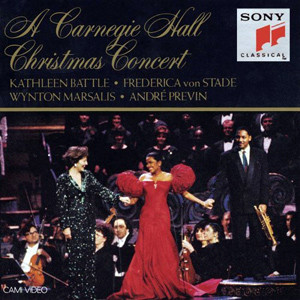