Home» Discography» Jazz At Lincoln Center Presents: The Fire Of The Fundamentals

Jazz At Lincoln Center Presents: The Fire Of The Fundamentals

This CD, which actually features the Lincoln Center Jazz Orchestra on only two selections, has highlights from a variety of concerts held at Lincoln Center during 1991-1993. A fine octet with clarinetist Michael White, trumpeter Wynton Marsalis and pianist Marcus Roberts do an effective re-interpretation of Jelly Roll Morton’s “Jungle Blues,” pianist Kenny Barron strides enthusiastically on a solo version of Thelonious Monk’s “Trinkle Tinkle” and Jimmy Heath’s soprano playing is showcased on “Ellington’s Stray-Horn.” Pianist/vocalist Jay McShann re-creates “Hootie Blues,” pianist Marcus Roberts romps through Monk’s “Bolivar Blues” and then “Dahomey Dance” offers particularly strong solos from a septet with Marsalis and tenorman Todd Williams. Betty Carter sings a spacy version of “You’re Mine You,” Marcus Roberts returns for a solo rendition of Morton’s “The Crave,” the Wynton Marsalis Sextet interprets Miles Davis’ moody “Flamenco Sketches” and vocalist Milt Grayson finishes the CD anti-climactically with the ballad “Multi Colored Blue.” It’s an interesting if not essential set with plenty of variety and many worthwhile performances. 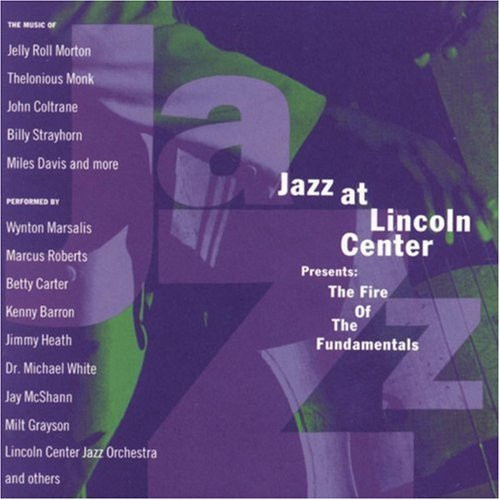 To some extent, this recording of performances gathered from concerts presented by Jazz At Lincoln Center is a history of the art. It is arrived at through aspects of a developing canon rich with vitality. The performances selected for this document are part of our mission at Lincoln Center, which is to first present first class performances, regardless of style; to create a viable jazz canon; to provide education for young musicians and listeners; and to build a jazz archives worthy of the music and the premier arts complex in America. Resulting from the first part of that mission is music that exhibits the language of Jelly Roll Morton, of Duke Ellington, of Kansas City, of Charlie Parke, of Thelonious Monk, Miles Davis, Jimmy Heath, Betty Carter, and John Coltrane.

The music is not dry and academic because both young and veteran jazz musicians and composers are mightily realizing their artistic ambitions through the subtle to explosive elements that make the art such a profound part of our national heritage. We hear the fire of fundamentals that are reinterpreted over and over by jazz musicians, regardless of school—blues, ballads, 4/4 swing, Afro-Hispanic rhythms. These are the central elements that distinguish jazz from other musics, and through those fundamentals great talents and innovators have always had their say, sustaining and extending our most democratic art, bringing the dreams of our most enlightened social propositions into the arena of aesthetic vibrance. In jazz, the democratic imperatives of talent determines success, nothing else—not who your father or mother might be, what your sex is, where you come from, what you worship, how much you have in the bank or stand to inherit.

What the jazz musicians represents is the victory of the common citizen, or the uncommon citizen from common circumstances. That is why the story of jazz is one of the grand tales of do-it-yourself invention evolving into a set of fundamentals that met the standards of artistic majesty by absorbing and extending all useful information, no matter how basic or complex. There is perhaps no more inspirational rags-to-riches tale than the tale of this music, for it rose from a variety of closed social circumstances to international recognition. It took prominence as much of a technological age, one in which the individual was in danger of being swallowed or enslaved by machinery. Through the symbolic perfection of human being and machine that we hear in the best musical performances, when the human spirit is projected through the machinery of an instrument, jazz musicians proved over and over that the soul was capable of making its way even in times so unprecedented, so filled with new challenges, in an era that needed an art perpetually rooted in the earth but capable of traveling into the universe of sophistication. Jazz pulled together things that were superficially at odds.

In more than a few ways, the techniques of jazz represent the kind of mediation that John Ford saw between literal policy and the practical policy that was improvised. As Peter Stowell observes in John Ford, “In film after film Ford demonstrated that the march of civilization is epitomized by tensions engendered in the spirit versus the letter of the law. Mediators are needed to bring the two into harmony.” Jazz musicians are such mediators. Their art allows the letter of the law that is composition made in the past to meet the spirit that is improvisation made in the present. They bring into harmony the past and the present, the known and the unknown, the familiar and the unexpected, the exotic flowers of the swamp and the universal crown of the stars.
We can better understand what jazz is within the context of our civilization by also looking at the way Ford used Will Rogers, the part-Indian actor from Oklahoma, an American of homespun intelligence and satire. Ford saw a man who could express the elements of this country in his own style and thereby embody the sort of Adam a new Eden needed if it were not to succumb to the decadent overcivilizing of Europe. By overcivilizing we do not mean anything other than the ritualized behavior, manner, and social vision that expressed not enriching discipline by decadent, prejudiced restriction.
Stowell’s description of Rogers fits jazz equally. We see a close relationship in spirit between the West and the world out of which jazz came if we think of the pioneer circumstances of the jazz band, where instrumental character was being redefined and American musicians were seeking to bring into the condition of aesthetic vitality whatever material they used, no matter its origins. Stowell writes of Will Rogers and the myth of the American West: “… he was a wanderer with a strong feeling for family and home; he believed in progress and traditional values; his comedy was serious, though he took nothing too seriously… He made people smile during the Depression, gave them faith in their youthful energy, got them to laugh at themselves, taught them to take nothing for granted, coached them in the joys of the vernacular… He wielded power without making it seem sordid.”

All right. There you have it. Jazz resolves the relationship between the individual and the community. Jazz is the work of both a comic and a tragedian. Sometimes, we hear a musical counterpart to the disruptive anarchy of the slapstick comedy given elegance by the physical genius of Chaplin. We witness in jazz the lyric acrobat whose daring sense of balance is equaled by the range of passion. The jazz musician can take our breath away and elevate our spirits. No matter how bad the surroundings might be, the true jazz musician, like the cowboy hero, comes galloping over the hill jut as the bad guys devoted to the dissemination of mush seem about to win the day. In no time, the jazz artist brings inspired form to the deadening circumstances of sallow feeling. The jazz musician wields power that is neither melodramatic nor obnoxious, achieving individuality through the collective affirmation of the swinging band, now and again meditating on the moment at the piano keyboard and orchestrating the individual consciousness through the paces of blues and swing.

In these performances, we hear all those aspects of jazz arriving through these various styles. Some musicians, like Wynton Marsalis, Todd Williams, Herlin Riley, Reginald Veal and Marcus Roberts, are heard in very different contexts, ranging from the music of Jelly Roll Morton to that of John Coltrane and Miles Davis. Others, like Betty Carter, Kenny Barron and Jimmy Heath come to smoke in their own styles, using the vocabularies each has become known for. All have in common, however, a deep sense of the fundamentals and how they can be adhered to or loosely adapted for personal purposes. Singing and swinging are the issues above all else.
From Kenny Barron and Marcus Roberts you will experience contemporary solo piano on as high a level as it gets, the former bringing his own personality to the languages of Bud Powell and Thelonious Monk, the latter looking into the range of independent materials and meters that can be used in the music of Morton and Monk. “Jungle Blue,” “Hootie Blues,” “Dahomey Dance,” “Flamenco Sketches” and “Multi-Colored Blue” provide examples of how much is available within the blues or blues-derived material. In Betty Carter and Milt Grayson, the grand reaches of jazz crooning from two different perspectives are expressed with an attention to sound and weight we hear so rarely in contemporary singing. Jay McShann moves through his feature with the simmering, unsentimental confidence that gives the subject of romantic retribution such a timeless position in the blues. The saxophone speaks from the gutbucket language of Morton to the Kansas City extensions of Charlie Parker and on to the space-age abstractions of Coltrane, finishing off in the enveloping world of Ellington by way of Billy Strayhorn. Whether we are listening to the clarinet of Michael White or the bass exchanges of Reginald Veal and Chris McBride, the alto saxophone of Norris Turney or Wes Anderson, the remarkably constructed piano improvisation on “Flamenco Sketches” or the elevated lyricism of Jimmy Heath, the music from these Jazz At Lincoln Center performances raises high the fire of the fundamentals and assures us that the chilling chaos of our times will not overcome the need for civilization, a need that the human heart addresses within symbolic structures of art, forever providing us with a past as vital as the pressure of the present.