These various ensembles negotiate the territory of blues and swing, romantic ballad and popular song, either with the proud heat of the propulsive jazz band or the lyricism that brings invaluable glamour to the love story. For the listener who has yet to get a grip on the Wynton Marsalis story, this selection of efforts should prove an invaluable primer. 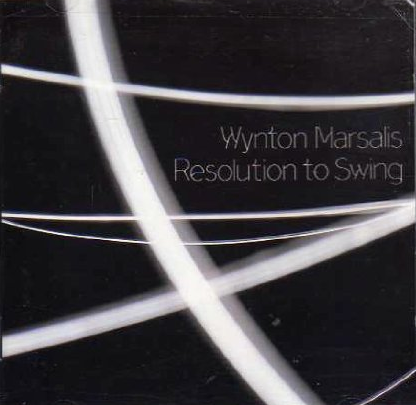 Shortly after Wynton Marsalis appeared in the early eighties, Ron Carter declared him the most important jazz player to have arrived in the last fifteen years. Now that more than ten years have passed, it is obvious that Carter was not only correct but that the fullness of Marsalis’s talent accounts for his having had the largest impact of any single musician on the direction and quality of jazz in our time. This compilation, which crosses the bulk of his career and finds Marsalis in a number of different contexts, performing original material as well as standards, provides some strong examples of why his position in this music has taken on such size.

But what happened could not have been predicted at the time of Carter’s observation, given the condition of things in the world of blues and swing, of golden age Tin Pan Alley romantic ballads and popular songs. Few young musicians were willing to take their chances on the art of jazz. Things had largely fallen apart; the feeling of crisis, decline, and compromise was in the air, while the meanings within the work of the grand masters were shrouded by the fickle mists of the media, making it difficult for those not intimidated by trends to find their way, to recognize the directions that were both the most demanding and enlightening. So, regardless of how startling his virtuoso command of the trumpet might have been, no one foresaw that Marsalis’s ambitions would divine such an extraordinary set of achievements, both his own and the result of his example.

The surprises came because there was an individual sensibility involved, one in which integrity was fuel for action. The action itself was initially focused on aesthetic detail. Faced with the chaos of commercialism and bad artistic judgement, Marsalis recognized how essential comprehensive knowledge is to making it through the dilemma of dissolution that is a familiar sorrow of our age. Marsalis had to think beyond the circumscribed ideas about jazz and contemporary life. The depth and the quality of his thinking demanded that he explore the entire range of his talent, which soon became omni-directional. Marsalis had to learn how to play his horn with authority in the context of jazz, he had to become a bandleader, an arranger and a composer, a talent scout and, eventually, a teacher of master classes. In the process, Marsalis evolved into the formidable talent his name has now come to mean.

For all of the attention Marsalis received, none of his achievements came quickly. They proved out certain dictums of culture that those reared on the fast food notions of experience tend to miss: All human efforts of grand import develop more slowly than we would like, and if those efforts substantially reinterpret an era, we discover that fresh relationships are often the most difficult to recognize, especially when serious observation has too often been replaced by opinions of no more intellectual density than gossip or superstition.

Born in October of 1961, Marsalis had to free himself of the ideas that limited his generation.
Even his early years in New Orleans and his father’s example as a dedicated jazz musician didn’t protect him from the casual attitude toward the significant that characterizes the popular culture into which so much of our youth sinks.
That Marsalis freed himself from the commercial and adolescent culture in which the reductive and the lucrative so frequently fuse was a triumph for the sort of individuality fine art demands. It was an act of rebellion against the simple-minded. He said during the middle eighties, ‘When I was growing up, the rendering of one bebop lick made you a jazz expert. Though my father constantly tried to pull my coat, I still thought I could play. I was greatly mistaken. In my generation, we didn’t know how to play the blues, couldn’t improvise over chord changes, didn’t know anything about swinging-and didn’t care either. We interpreted all those musical skills as expressive of a bygone era that had no relevance to us. A serious misconception. When I was fortunate enough to get constructive criticism from musicians like Art Blakey and Ron Carter, I began to discover all the things that were missing from my playing and that my daddy tried to tell me about before. I took it upon myself to learn what I had missed.’

The jazz education of Wynton Marsalis led to insights that were given even greater depth by the world class prowess the trumpeter had in European concert music, as a soloist and a student of musical form. He was able to isolate the qualities that made jazz a music of democratic distinction. His studies-and his conversations and performances with grand-masters allowed the trumpeter to see beyond the limits of schools and styles. Marsalis wasn’t interested in any sort of generation gap or any idea of individuality that spurned the communion across generations we all should know underlays the resonance of civilization. That is why these tracks feature New Orleans elders like Teddy Riley and Danny Barker, veterans such as Ron Carter and Joe Henderson, and young musicians who are either part of Marsalis’s generation or are figures whom Marsalis groomed to a state of provocative fluency.
The material provides the listener with a smorgasbord of standard songs, blues, swing, and original works.

By choosing to develop along the line of fundamentals, Marsalis observes, ‘a musician will have to discover the elements that jazz of all directions has in common. That made me lose interest in trying to create a style that went in one direction. I decided I just wanted to play jazz itself – jazz unlimited by schools or technical prejudice. If that meant New Orleans music, good; if it was the music of Thelonious Monk, good; if it forced you to learn how broad and deep the music of Duke Ellington is, fine; If you had to address what Charlie Parker bought into the music, wonderful. I didn’t care. I heard things in King Oliver that I also heard In Ornette Coleman and John Coltrane. The connections aren’t always obvious, but when you are dealing with essences you are also dealing with what gets emphasized and what doesn’t. Harmony and rhythmic complexity vary from period to period, but a powerful melodic line, some true blues feeling, some swing they are always there. They hold jazz together.’

The clarity of what Marsalis came to understand is heard In the way that he used his ensembles, whether early in his career or not. He was always looking to get the most of his writing and his musicians. As he observes, ‘Jazz composition can either be an end in itself, where the writing is absolute, or It can be a launching pad for improvisation. But in jazz composition, the rhythm section is almost always improvising, and one of the most difficult things to do in composing a piece of jazz music is to properly use the improvised dialogue basic to the rhythm section.’
Whether the music is his or another’s, Marsalis almost always invents something quite striking.
His arrangements of Think of One and April in Paris are perfect examples of his originality, while Harriet Tubman, Happy Feet Blues, and  Down Home with Homey show the range of his composing within the blues idiom. The development from Stardust to Where or When is remarkable, while the difference in phrasing heard when he improvise on Skain’s Domain as opposed to Jig’s Jig reveal increasing resources, those of a self-made avant garde and a feeling for dance authority in odd meters.

As a bandleader and a composer, Marsalis came to understand the importance of jazz rhythm and the kind of ensemble momentum known as swing. In jazz, the condition of grace is swing and when a band is swinging, it has achieved of democratic eloquence, Because Marsalis sought to personalize that democratic eloquence, he was able to understand the deeper meanings of the call-and-response element basic to this art.

‘In jazz,’ he says, ‘the most fundamental proposition is musical conversation. That conversation has elastic qualities in that it functions on a number of levels, sometimes all at once. It works melodically and texturally, within the context of the blues; it works harmonically in the context of all of Western harmony, from Bach to Schoenberg; it functions rhythmically within the context of African-derived percussion conceptions – in other words, swing. Jazz is ultimately about swing, which is comprised of coordination and negotiation. In Think of One, the arrangement of April in Paris, the way we play on Down Home With Homey, our conception of musical conversation, of call-and-response, of thematic development though improvisation, becomes clear. This conception is arrived at, even with musicians of very different styles. No matter what we’re playing, we are negotiating with each other and extending each other’s ideas, always trying to give them the emotional force art has to have in order to arrive at coordinated human meaning.
And in some way, from sports to romance, human meaning always had something to do with individuals negotiating for themselves and for higher goal of coordination.

These various ensembles negotiate the territory of blues and swing, romantic ballad and popular song, either with the proud heat of the propulsive jazz band or the lyricism that brings invaluable glamour to the love story. For the listener who has yet to get a grip on the Wynton Marsalis story, this selection of efforts should prove an invaluable primer.

2. Big Trouble In The Easy
Written-By – W. Marsalis
from the album: Tune in Tomorrow

4. Delfeayo’s Dilemma
Written-By – W. Marsalis
from the album: Black Codes from the Underground

6. The Seductress
Written-By – W. Marsalis
from the album: The Resolution of Romance – Standard Time, Vol. 3

8. Harriet Tubman
Written-By – W. Marsalis
from the album: Thick in the South

9. Oh, But On The Third Day (Happy Feet Blues)
Written-By – W. Marsalis
from the album: The Majesty of The Blues

11. Where Or When
Written-By – R. Rodgers/L. Hart
from the album: The Resolution of Romance – Standard Time, Vol. 3

13. Down Home With Homey
Written-By – W. Marsalis
from the album: Uptown Ruler