Composed in 1939 as incidental music for a play by Irwin Shaw, Quiet City was reset by Copland the following year for solo trumpet, solo English horn and string ensemble. The mood of the work contrasts questioning lines and long cantilena phrases in the two solo voices with an accompaniment at once still and subdued, and later alternately fervent and moving. Wynton Marsalis and Phillip Koch combine their unique talents in this version, scored for solo trumpet, solo English horn and chamber wind ensemble by Donald Hunsberger 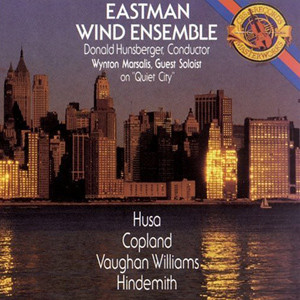 Along with Ralph Vaughan Williams’s Folk Song Suite and Gustav Hoist’s two suites for military band, Toccata Marziale is one of the cornerstones that formed England’s military band tradition in the early twentieth century.
A descendant of the earlier keyboard toccata, it combines quick staccato movement with a long, gracious melodic line. Instrumentation calls for twenty-one parts with little or no doubling, a practice that reflects the balance and size utilized by regimental bands in England in the 1920s. The resultant crisp, clean timbre produces a clarity of inner voices which may well be lost in enlarged, massed symphonic band performance.

Variations for Wind Band, a set of theme, variations, chorale, and finale was originally composed for the 1957 National Brass Championship of Great Britain. The work has undergone two scoring metamorphoses: an orchestrai version by Gordon Jacob retitled Variations for Orchestra, and this symphonic wind ensemble version orchestrated by Donald Hunsberger that uses the hill resources of the contemporary American wind band with its wide variety of woodwind, brass, percussion and keyboard voices.
Vaughan Williams composed the Variations concurrently with his Ninth Symphony, shortly before his death; both works possess the sweeping lyrical lines which, combined with his unique lise of expanded scales, create those wonderful harmonic interchanges so commonly associated with his writing. It is scored for a hjll complement of winds and brass (including piccolo trumpets and flugelhorns), plus harp, celesta, string bass and percussion.

Since 1951, the musical world has rejoiced over Paul Hindemith’s monumental Symphony for Band. Komertmusik, Op. 4l, an equally outstanding work written twenty-five years earlier for the annual Donaueschingen Music Festival, was first performed by “a student orchestra of the German Army,” conducted by Hermann Scherchen, its dedicatee.
The Konzertmusik was a part of Hindemith’s Gebrauchsmusik approach to composition in which he combined a practical melding of his serious compositional craft with the purposefui intent of making his music less formidable for audiences and performers.
Hindemith’s scoring of this three-movement work requires a large brass ensemble in comparison with the woodwinds. In the preface to the work, Hindemith offers substitute instruments for the flugethorns (soprano saxophones, or soprano and alto saxophone), tenor horns (Wagner tenortuben or tenor saxophones) and baritone (bass clarinet) and stresses flexibility in these decisions. This recording employs the substitute saxophones and bass clarinet alternating with the brasses in an attempt to create a more satisfactory parity of woodwind-to-brass balances and textures in solo and concertante sections.

Composed in 1939 as incidental music for a play by Irwin Shaw, Quiet City was reset by Copland the following year for solo trumpet, solo English horn and string ensemble. The mood of the work contrasts questioning lines and long cantilena phrases in the two solo voices with an accompaniment at once still and subdued, and later alternately fervent and moving. Wynton Marsalis and Phillip Koch combine their unique talents in this version, scored for solo trumpet, solo English horn and chamber wind ensemble by Donald Hunsberger. This edition is the only such setting to bear the approval of the composer.

Karel Husa’s numerous works for orchestra, concert winds, chamber groups and vocal ensembles have gained him many honors including the Pulitzer Prize. Composed during the summer and fall of 1968 and dedicated the work to the capital of Czechoslovakia, Music for Prague 1968 is written in a free tone-row technique and also utilizes aleatorie and quarter-tone elements. Husa scored it for a full American concert band of woodwinds, brass and an expanded percussion section, and, in his orchestral version, used piano and harp, which are included on this recording.

He has requested that the following descriptive commentary be placed in the program at performances of the work:
“Three main ideas bind the composition together. The first and most important is an old Hussite war song from the fifteenth century, ‘Ye Warriors of God and His Law; a symbol of resistance and hope for hundreds of years whenever fate lay heavy on the Czech nation. It was utilized also by many Czech composers, including Smetana in My Country. The beginning of this religious song is announced very softly in the first movement by the timpani and concludes in a strong unison (Chorale). The song is never used in its entirety.
“The second idea is the sound of bells throughout; Prague, also named The City of Hundreds of Towers; has used its magnificently sounding church bells as calls of distress as well as of victory.
“The last idea is a motif of three chords, first appearing very softly under the piccolo solo at the beginning of the piece, in flutes, clarinets, and horns. Later it reappears at extremely strong dynamic levels—for example, in the middle of the Aria.
“Much symbolism appears: in addition to the distress calls in the first movement (Fanfares), the unbroken hope of the Hussite song, the sound of bells, or the tragedy (Aria), there is also the bird call at the beginning (piccolo solo), symbol of the liberty which the city of Prague has been only for moments during thousand years of existence.” (Karel Husa)

The Eastman Wind Ensemble, America’s Premier Wind Band, is comprised of undergraduate and graduate students at the Eastman School of Music of the University of Rochester.
This album was recorded in the Eastman Theater of the Eastman School of Music on March 28-30, 1988, using five Schoepps Omni-directional microphones (with MK2S capsules) evenly spaced across the stage at a height of approximately ten feet. This “main array” was employed to capture the natural balance of the ensemble as intended by its conductor, Dr. Hunsberger.
Two Schoepps cardioid accent microphones (with MK4 capsules) were used to define percussion transients and “edged” in only slightly to the overall sound picture in the final mix.
All microphones were fed through a Neve custom-designed console and recorded onto the Sony PCM 3324 digital tape recorder.