Music and paintings share so many characteristics – textures, colors, layers, line, form, shape – and when these two art forms come together, they create a bold new medium. Jazz and Art, the latest studio album from the Jazz at Lincoln Center Orchestra with Wynton Marsalis, lets listeners experience that transcendent combination firsthand through seven imaginative works from celebrated composers. Taking inspiration from artists like Romare Bearden, Piet Mondrian, and Stuart Davis, the Orchestra constructs elaborate, evocative soundscapes that joyously explore the act of creation. 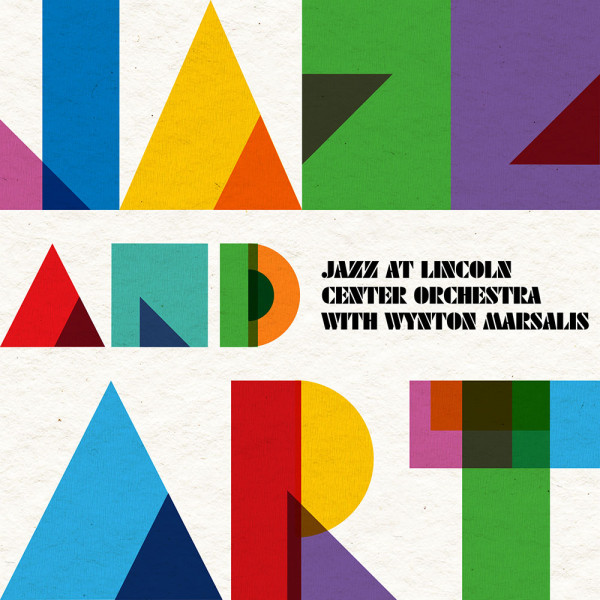 Music and paintings share so many characteristics; textures, colors, layers, line, form, shape. No wonder they are such agreeable collaborators. When these two art forms come together, they create a new medium.
In February 2010, the audience in Jazz at Lincoln Center’s Rose Theater got to experience that transcendent combination when seven imaginative composers presented new works accompanied by projections of the paintings that inspired their creations.

Great paintings trigger our imagination, which in turn helps us break through our own barriers. One of the aspirations great artists often share is to break the rules—to try to get back to being a child and a state where there are no constraints on reality. When Chagall depicts animals flying or a violinist upside down in the sky, the impossible becomes real. The truth is anything is possible, as long one doesn’t impose limitations based on previous experience. Each artistic endeavor is an opportunity to explore new qualities of imagination.

When composers interpret great paintings through music, they create a new experience, a fresh way to see the art. It is not the desire of the composer to dictate how the viewer will experience the painting; rather, it’s to help audiences hear movement in the fixed image, to help one to see it with one’s ears.

We hope you enjoy this music!

“As I delved into[Davis’s]work and his history, I was struck by how committed he was to the cause of working people, and how he chose to communicate that through his work.”

A very imaginative piece that opens with shouts and squeaks over a mysterious bass line out of which an abstract, constantly shifting groove materializes, eventually releasing itself into a swinging solo section featuring Wynton Marsalis and Ted Nash.

“‘Blue Twirl’ is meant to musically mimic the fluidity of Sam Gilliam’s process in creating that piece of art. Through research I learned that many aspects of the work were improvised, in a way; some drops of paint fell where they did because of how the wind blew that day, other things were allowed to take shape as gravity or other forces manipulated them. The first section of “Blue Twirl” has two melodic themes that can be played at any time against each other, creating variation in the performance from one performance of it to the next. The second, faster part of the piece reflects on the more vibrant, gleaming aspects of the work of art, and celebrates it in general.”

This very powerful statement by Papo Vazquez not only features his compositional skills but his expressive and passionate trombone as well. The orchestra is also joined by three fantastic percussionists on batá drums, instruments which historically have been used for religious purposes.

“The composition was based on my observation of the African Yoruba religion depicted in the artwork of Wifredo Lam. It was then appropriate to create a composition influenced by the ancient melodies and rhythms of the Yoruba religion with modern harmonies and jazz improvisation. It is a journey from the shores of Africa through the Caribbean and to America. The composition describes hardship, pain, survival, and triumph.”

This piece features a melody that is direct and powerful and also rooted in the blues. The middle section is a plaintive ballad featuring Victor Goines. After a recap of the first section, it closes with Wynton improvising a work song over an unpretentious vamp.

“‘Bearden (The Block)’ is a tonal depiction of his block in Harlem that has many happenings going on at the same time. There’s the usual traffic, a funeral with an angel ascending to heaven, a barbershop quartet singing, a couple making love, etc. I also wanted to include his Charlotte, NC roots, so some collages like ‘Three Folk Musicians,’ ‘The Piano Lesson,’ and ‘The Prevalence of Ritual’ give the tune its Southern charm. The section in three is Bearden’s ‘The Conjure Woman,’ and the ballad is ‘Reclining Nude’—self-explanatory.”

“Music has taken me to places I never dreamed of. Music has connected me to beautiful people and beautiful ideas. What is that thing that fires up our imagination, makes us want to draw a picture, paint a painting, sing a song, make something? Whatever that is makes us human. Winslow Homer inspired me.”

The Repose in All Things (Tim Armacost)

Piet Mondrian said in 1920: “We must free ourselves from our attachment to the external, for only then do we transcend the tragic, and are enabled consciously to contemplate the repose which is within all things.” Tim Armacost clearly frees himself from anything tragic in this very imaginative composition.

“I was thinking a lot about synesthesia—the firing of one sense by sense material from another sense or part of the body. In my case, sound and sight are connected—each key is a color. I chose this painting, ‘Composition in Red, Blue and Yellow,’ for it’s combination of lines and colors. In my mind, red is the key of G, blue is F, and yellow is Bb. So I took the melody through all three keys to get started, put the first solo in G, and the second as a modified blues in F, and worked my way back to Bb in the out head.”

“Most of Lewis’s works were influenced by jazz. While growing up in Harlem, he used to sneak into rent parties with his brother’s violin so he could hear the music and see everyone having fun. So imagine walking up 137th street near 8th Avenue around 9pm in the 1940s. You are trying to decide which rent party you are spending your 25 cents at. The first music you hear is the drums playing. Then you faintly hear a couple of horns playing like Louis Armstrong. As you walk up the street, you start to hear more bands playing: Dizzy, Bird, Clark Terry, Ornette, Teddy Wilson doing a solo piano gig, etc. They’re all playing different melodies and styles, but are using the same root tune. After listening to all of these styles being played, you decide you want to hear Eric Dolphy’s band. As you walk in the house, the other bands die out and all you hear is Dolphy (and 14 other out-of-tune musicians) playing the head and going into a solo on bass clarinet. After the tune, the band goes into a trombone feature, but you decide go hear something else. When you go back outside, the rest of the parties are over except for one. You hear the drums again, then you hear a trumpet solo. Not a terribly good one. You hear a trombone section background, then the illustrious saxophones. You step into the house and hear a full big band (too loud as usual) playing a shout chorus, then a big finish.”

Blue Engine Records would like to extend a sincere thanks to the families, foundations, representatives and estates of all of the artists whose work is represented in this package and provided the inspiration for this wonderful music.
The mission of Jazz at Lincoln Center is to entertain, enrich, and expand a global community for jazz through performance, education and advocacy.