Hell’s never sounded as suave and soulful as it does on Sherman Irby’s Inferno by the Jazz at Lincoln Center Orchestra (JLCO) with Wynton Marsalis. Irby, the lead alto saxophonist for the JLCO, cleverly interprets Dante Alighieri’s epic poem from “The Divine Comedy” to create a sweeping work that takes listeners on a lyrically swinging tour of the underworld’s nine circles.
The epic composition, recorded live in 2012, lets the JLCO’s all-star improvisers give life to the colorful denizens of hell and casts the late, legendary baritone saxophonist Joe Temperley as the voice of Dante. Irby’s Inferno both stands alone as an irresistible musical narrative and sheds new light on Dante’s classic; this unique exploration of the epic poem captures its timeless quality and ingeniously places it in conversation with the jazz canon. 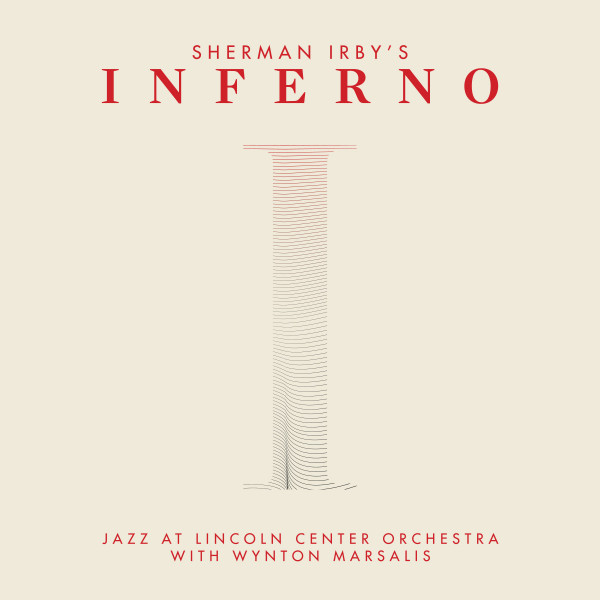 After all, Inferno is Irby’s interpretation of Dante’s epic 14th-century poem of the same name, which follows the author on his imagined, harrowing journey through the nine circles of Hell.

Listen beyond that opening trombone cry to when the horns all begin scowling and barking at each other. Yes, Irby’s Southern roots are immediately apparent, but so is the life he’s led since leaving his hometown of Tuscaloosa, Alabama. In addition to his time with the Jazz at Lincoln Center Orchestra with Wynton Marsalis (JLCO), Irby has worked with Elvin Jones, James Cleveland, Roy Hargrove, Papo Vazquez, McCoy Tyner, and Marcus Roberts, and his diverse influences are on full display in the gumbo that is Inferno.

Art reflects the time in which it was created. Dante completed The Divine Comedy (of which Inferno was part one of three) in 1320, during a time of great political upheaval and 18 years after he was exiled from his hometown of Florence. He seems to have written many of his enemies into the work as a way of getting back at them.

While jazz certainly embodies freedom, Irby’s Inferno represents another timely message. In today’s world of division, hype, and distractions, where mankind can be manipulated by algorithms and become addicted to a phone’s beep, we’re constantly reminded that our basic instincts are animalistic. However, there is an intelligence and cleverness to Irby’s rich, multi- layered, powerfully compelling Inferno that reminds of us of that which makes us human. Of course, all kinds of music have the ability to help us transcend. But it’s hard to think of another genre besides jazz that can capture so many different— and often conflicting—feelings all at the same time. Irby’s Inferno is filled with a wide range of feelings, intelligent and dense harmonies, and thoughtful, irresistible rhythms. This isn’t simply a jazz version of an old poem; this is an important musical piece that matters today.

The power of Irby’s timely and compelling Inferno lies in its uniqueness and intelligence. And, of course, its swing. This is “Irby’s main goal above all else,” says fellow JLCO bandmate Chris Crenshaw, whose musical interpretation of James Weldon Johnson’s God’s Trombones premiered on the same concert as Irby’s Inferno in 2012.

Irby’s affection for his JLCO bandmates is clear in his writing. Crenshaw comments that “Sherman cares for his brethren, and he cares about this music, and that goes a long way.”

“I wrote this act for Joe Temperley,” Irby remarks. “He was the band’s elder statesman and musical guide for almost 30 years. It was my honor to feature his beautiful, passionate sound as the voice of the central character, Dante.”

[ Joe Temperley’s] sound contained the breadth of his years, tempered by the ups and downs of man’s journey through life.
– Sherman Irby

While Duke Ellington, Mary Lou Williams, and others have composed suites and religious pieces, it really is hard to find a precedent for a piece like this. After all, here we have a six- movement suite featuring a big band interpreting an epic poem.

That said, with or without Dante’s story as context, Irby’s Inferno would stand on its own.

Irby’s intelligence and unique way of honoring and expanding on tradition is exemplified in Movement One, “House Of Unbelievers.” This movement depicts the first circle of hell whose inhabitants are the souls who did not believe in God (but have not sinned). This category includes poets, scientists, philosophers, unbaptized infants, and kings of non- Christian lands.

In depicting this circle, Irby envisioned a cocktail party. “The guests,” he says, “are greeted with brass fanfares and people entertained by a big band. The solos reflect those guests at the party.”

Listen to the rich, lush harmonies, the relaxed swing, the playful flutes and the crisp horns. It may feel familiar, but it isn’t, and that’s part of the magic that makes Irby’s journey into the unknown so exciting.

Movement Two, entitled “Insatiable Hunger,” highlights circles two and three, both of which, in Irby’s words, “contains souls who were lustful and consumed and destroyed others and those whose gluttonies destroyed themselves.”

This feeling is put to a groove that Crenshaw describes as “minimalistic but powerful and meaningful (and funky to say the least).” Irby says he created it by “grouping the band in pairs, representing people doing their own thing inside of a big room; if an observer takes a step back, they will see the many turn into a single, pulsating organism.”

Irby’s goal for Movement Three, “Beware The Wolf and The Serpent,” (which depicts circles four and five, home to the avaricious and wrathful) was to capture a feeling of “senseless fighting.” As Irby says, he accomplished this by “dividing the orchestra in half, while keeping the trombones interacting with both. I even have the soloists interrupting each other. Total disrespect to each other and to themselves. The human condition…”

Movement Four depicts circle six and the heretics now condemned to spend all of eternity burning in their graves. Entitled “The City of Dis,” this movement is named for the land on the other side of the River Styx that contains the final four circles of Hell. After the choir of drumrolls and playfully dissonant harmonies take listeners ashore, they find themselves on new, exotic ground. ”I wanted to get the flavor of Iranian ‘belly dancing’ music, while maintaining a bit of the swing groove,” Irby says.

Movement Five, “The Three-Headed Serpent,” depicts circle seven, home to those who have committed violence against others, themselves, or God. As Irby says, “There’s a lot of fighting in this one, like two dogs sniffing each other.” It’s here that “the band goes to war.” The fighting is illustrated by the various sections trying to talk over one another.

Movement Six portrays circles eight (for those who victimized others) and nine (for those, like Cain and Judas Iscariot, who victimized others with whom they shared a special bond). Chris Crenshaw says, “One of my favorite pieces is ‘The Great Deceiver’ because it has different grooves; it features many of us; it has functional dissonance representing the cold nature of the piece Sherman intended; and it’s comparable to a movie score with surprise after surprise.” Irby’s goal here was “to create the imagined sound of a violent, frozen Hell.” To accomplish this, he “used the upper woodwinds and trombones in their highest ranges. It is supposed to sound like it hurts, with the trumpets to give a short bit of relief before the pain starts again (probably the cruelest form of torture).”

Inferno’s lush, sweeping, swinging, and reflective finale, “The Shores of Mount Purgatory,” marks Dante’s arrival at the foot of Mount Purgatory. As Irby remarks, “It’s difficult to write a large work for the jazz orchestra without paying an homage to its greatest composer, Duke Ellington. I waited to do this for the finale because I wanted Joe, who was once a member of Ellington’s orchestra, to be the last voice of the story.”

It’s a touching end to a remarkable piece, and it reflects Irby’s optimistic outlook. Inferno reflects the unique essence of jazz that brings joy to the sadness, playfulness to the serious, and vice-versa. Just as one can only get to heaven by passing through hell, Irby’s Inferno reminds us that there’s light at the end of the tunnel.