This excellent disc brings together three superb performances of three of Haydn’s best concertos. As a composer, Haydn wasn’t really interested in the concerto as a form. He was the inventor of the classical symphony, and the entire orchestra was his instrument. For although he played violin, viola, keyboard, and timpani, he wasn’t known as an outstanding virtuoso on any of them. This makes him the first truly professional composer (as opposed to a performer who composed) in the history of music. Even Mozart and Beethoven were pianists first, and composers second. It’s also not surprising, then, that when he turned to the concerto he preferred less common instruments, like solo parts for cello or trumpet. He even wrote a concerto for double bass, alas lost. But we have these three great works to console us. 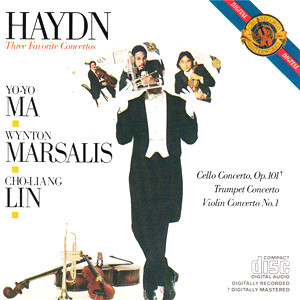 Franz Joseph Haydn (1732-1809) wrote his Concerto in E-Flat Major for Trumpet and Orchestra in 1796, when he was in his sixty-fourth year. The Concerto owes its existence to the invention by Anton Weidinger, in the 1790s, of a radically different instrument, the keyed trumpet. (Its predecessor is called the natural trumpet, a larger instrument restricted by its physical characteristics to the notes of one harmonic series.) Now at last, the trumpet was able to play all notes of the chromactic scale and, thus, to modulate to different keys and respond to the orchestra in any of them. Haydn was intrigued by the keyed trumpet – an instrument which, however, was short-lived, replaced in 1813 by the more versatile valve trumpet that we know today.