The Jazz at Lincoln Center Orchestra with Wynton Marsalis and special guests take you through 100 years of jazz piano on their new album, Handful of Keys. Star pianists Joey Alexander, Dick Hyman, Myra Melford, Helen Sung, Isaiah J. Thompson, and the JLCO’s own Dan Nimmer grab hold of all 88 keys and reveal the full extent of the piano’s evolution over the 20th century.
Recorded on opening night of the 2016-17 Jazz at Lincoln Center season, Handful of Keys showcases a band in full stride, burning through electric arrangements of beloved compositions from James P. Johnson, Bill Evans, McCoy Tyner, and more. With guests ranging in age from 13-year-old prodigy Alexander (recently featured on 60 Minutes) to 89-year-old American treasure Hyman, Wynton Marsalis and the JLCO survey jazz piano’s past and give the stage to several prodigies who are taking the instrument in bold new directions. 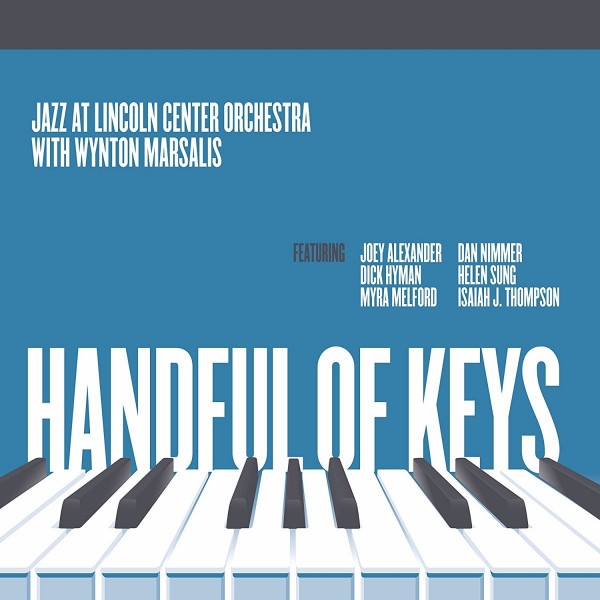 Jazz at Lincoln Center’s Rose Theater in Frederick P. Rose Hall. The vibe is open, light. There isn’t a bad seat in the house. The venue has an excitement and an intimacy you’d expect from a smaller room; a jazz club, say, with beautiful acoustics, every sound present and crystalline. Our host Wynton Marsalis invites and encourages, creating an ethos of inclusivity. Here is a home for jazz in the broadest sense, one that welcomes everything from ragtime and dixieland to swing and bebop, the blues and gospel traditions, and the experiments and innovations of the 1960s and beyond. As jazz scholar John Szwed has noted, “In the 1960s, jazz established its ‘new,’ which would stay new for years. At the same time, bebop moved to become the center of jazz, and swing underwent a late revival. It was the beginning of permanent diversity in jazz.”* Rose Hall is an ideal space to celebrate this “permanent diversity.”

The Jazz at Lincoln Center 2016-17 season opened with a program entitled “Handful of Keys: A Century of Jazz Piano,” kicking off a year-long celebration of the many artists, styles, and movements encompassed in the century-long jazz continuum. While the title is borrowed from Fats Waller, recalling his high-spirited and virtuosic solo from 1929, this concert was an “encapsulated history” exploring the many rich traditions and styles that define jazz piano today, featuring the combined forces of the stellar Jazz at Lincoln Center Orchestra with six guest pianists.

These guest pianists, along with the Orchestra’s own wonderfully versatile Dan Nimmer, covered a wide age span, from 13-year-old Joey Alexander to 89-year-old Dick Hyman, with Isaiah J. Thompson, Helen Sung, Larry Willis, and myself filling in the decades—a truly multi-generational, international, and aesthetically diverse group. The repertoire included music by some of the 20th century’s outstanding pianist/composers: Oscar Peterson, James P. Johnson, Bill Evans, Wynton Kelly, and McCoy Tyner, with new arrangements by some of the evening’s performers including Hyman, Sung, and JLCO members Walter Blanding, Ted Nash, and Marcus Printup. Yet no matter what era of jazz it represents, the Orchestra makes whatever they play music of today.

I arrived at the large rehearsal room at Jazz at Lincoln Center early on a Wednesday morning after a sleepless night on a red-eye from San Francisco. The welcome I received from Marsalis, the Orchestra members, and the staff at JALC couldn’t have been more hospitable. We sat with many supporters of JALC who had been invited to this special opportunity to see and hear behind the scenes and listened to the other pianists rehearsing their pieces. The next evening, backstage during the performance, listening with and to the other pianists, I felt a palpable sense of not only enjoyment and appreciation for the gifts each had to offer, but inspiration —the possibility of trying something new or different heard in the others’ playing. What struck me was the unique way in which each guest soloist revealed yet another facet of the rich legacy of jazz piano. Each “voice” opened up new futures for jazz as it conjured one of the many different times, places, and musical communities that forged this music.

We start near the beginning with James P. Johnson’s “Jingles,” first recorded in 1927, and presented here in an ebullient arrangement and performance by maestro Dick Hyman. Watching and hearing his fingers flying over the keys was both exhilarating and absolutely mesmerizing.

Next up, we hear Isaiah J. Thompson on “Lulu’s Back in Town,” popularized by Fats Waller in 1935, Lulu’s Back in Town. This rendition is full of invention, as Thompson weaves harmonies from the second half of the 20th century with stride styling left-hand leaps into one contemporary pianistic tour de force. At the core of this 19-year-old’s playing is sheer joy and good feeling.

Moving ahead to the 1960s, “Four by Five” by McCoy Tyner, inventively arranged here by Helen Sung, makes a powerful impact, expanding upon the original quartet version with intricate contrapuntal lines and polyrhythmic interplay. Sung’s playing throughout is equally potent in the spirit of Tyner’s dynamic pianism and writing.

This is followed by “Very Early,” a waltz composed by Bill Evans when he was still a student in 1949. It’s presented here in a lush arrangement by the JLCO’s Walter Blanding. Joey Alexander’s pianistic language draws on everything from the blues to complex harmonies. His phrasing is elegant, with a maturity that belies his young age. He is endlessly inventive — stretching and morphing the melody and harmony as his solo takes a number of twists and turns, finally arriving at two-hand unison lines and eventually resolving in a beautifully lyrical cadenza.

It was a tremendous thrill for me to have my piece “The Strawberry” arranged for the Orchestra so beautifully by Ted Nash. Staying true to the folk-like spirit of the tune, he enriched the melody and harmony with counterpoint, thickening and thinning the texture to heightened effect. It was equally exhilarating to play and interact with these musicians, immersed in the full power of their sound, their broad and colorful palette — individually and collectively. In my set, it was also an honor to pay tribute to some of the many pianists, including Cecil Taylor, Andrew Hill, and Don Pullen, whose expansion of the expressive capability of the piano had such a big impact on my own development.

In Oscar Peterson’s uplifting piece from the Civil Rights era, “Hymn to Freedom,” the ensemble is pared down to a trio of piano, bass, and drums with Isaiah J. Thompson holding forth eloquently in this gospel-imbued performance.
We circle back to the swing era of 1931 with Benny Carter’s classic arrangement of “All of Me,” where it’s all about the kinetic conversation between orchestra and soloist, Hyman deftly weaving lush two-hand harmonies with percussive single-note lines in turns punctuated or elaborated on by the ensemble.

And finally, to bring it home, we have “Temperance” by Wynton Kelly, arranged by Marcus Printup. There is a sense of family coming back together when Dan Nimmer steps in to play the final number with the orchestra. The joy and respect of his ensemble-mates are palpable as he draws on multiple styles and traditions in his wide-ranging and hard-swinging solo.
Let me close with a few words on the extraordinary Jazz at Lincoln Center Orchestra. The members of this ensemble have a special ability to shine, individually and collectively, to flow organically between the many different approaches to rhythm, harmony, melody, and texture that the history of this music embodies. As Marsalis himself has said, “We are free to utilize all that we know…all of it exists at one time.” What an incredibly rich time it is, when all of this is at the fingertips of some of the greatest jazz musicians of our generation.

This project was truly an uplifting experience, owing to the warmth, generosity of spirit, the genuine love and enthusiasm, and the always riveting solos of these artists, as well as the attentive and appreciative audience and all of the dedicated and talented people who work for Jazz at Lincoln Center. You’ll find something of that experience captured and shared on this recording. These performances dazzle us with the diverse contributions of old and young, men and women, transcending race and nation, promising a great future for this music in the 21st century and beyond.