Officially billed as a Concierto para a vida, this “Concert for Planet Earth” was held at the first United Nations Conference on the Environment and Development (UNCED) – “Rio 92.” The concert was designed to celebrate the positive aspect of human nature, represented by varied types of music and artists from many nationalities. The Wynton Marsalis Septet makes its contribution with performances of three of Marsalis’ compositions. Recorded live in Rio de Janeiro. 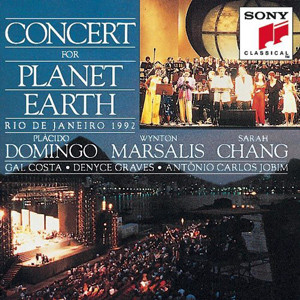 The scene is set: the moon shines down from a cloudless sky, caressing the waters of the lagoon on whose shores the concert will soon take place. Thousands of people form long queues, waiting to hear some of the world’s greatest musicians. The atmosphere on stage and in the audience is international and cosmopolitan, for the occasion marks the first United Nations Conference on the Environment and Development (UNCED) – “Rio 92.” For just two weeks, Rio de Janeiro is the center of the world. Never before have so many heads of state come together in a single place to discuss our planet’s ecological future.

Never before have so many ecology groups met to champion the cause of the ailing earth. With such a desire for harmony not only between Man and Nature but also among the world’s different nations, how could music not be included? Officially billed as a Concierto para a vida, This “Concert for Planet Earth” expresses the wish to stem the tide of increasing destruction inflicted on our planet as a result of human folly. It is a concert, in short, to celebrate the positive aspect of human nature, represented by varied types of music and artists from many nationalities. And what more positive aspect is there than the music of mankind.

First, Placido Domingo walks on stage as though welcoming friends to his home, thus setting the tone of the celebration with his charm and cheerful good humor, but, above all, with his enchanting voice. Following “Jota” and “No puede ser” from two sentimental zarzuelas, Domingo continues to delight the audience with “O Paradis” from Meyerbeer’s L’Africaine and “Manha de Carnival” by Tom Jobim from Black Orpheus. Next, “Tom” Jobim, an “emblematic” musician whose very name reveals his land of origin – Antonio Carlos Brasileiro de Almeida Jobim, joins Gal Costa, to perform melodies which have long since become inextricably linked with the name of Brazil.

Wynton Marsalis and his Septet enthrall the audience with their astounding virtuosity – particularly that of Marsalis himself who coaxes unbelievable sounds from his trumpet – in “1, 2, 3, 4,” “Oh but on the Third Day” and “The Death of Jazz.” Then the eleven-year-old Korean violinist Sarah Chang impresses with the brilliance of her technique. The bow in the young girl’s hand glides, flies and dances playfully over the strings of her instrument. She seems to disprove the claim that the violin has only four strings: in the course of her playing, little Sarah Chang’s instrument keeps on inventing ever more strings.

Placido Domingo returns to offer Puccini’s “E lucevan le stele” from Tosca and, joined by Denyce Graves, Saint-Saens’s “Mon coeur s’ouvre a ta voix” (My Heart at Thy Sweet Voice) from Samson et Dalila. After a solo turn with Carlos Gardel’s “El dia que me querias,” Domingo and Graves perform Leonard Bernstein’s “Make Our Garden Grow,” whose words so fittingly echo the central theme of this “Concert for Planet Earth.”
Finally, Domingo brings all the artists back on stage for a performance of “Aquarela do Brasil,” unleashing a veritable tropical storm of frenzy. And with that the evening is over. Many of those present are reluctant to go home, and they remain in their seats or stand around in conversation.

The concert reflects the peaceful and harmonious atmosphere of “Rio 92.” The mood has been one of utopian calm and all thought of force has been put to flight: although more than one hundred heads of state were assembled in the city, no serious disruptive incidents were reported at the summit. It seems the accord between Man and Nature was preceded by an accord between nations, producing this enchanted evening and bringing the most varied countries and cultures together through music. The conference was a beginning, the concert is a pointer to the future.
The moon is still shining. The illuminated figure of the Cristo Redentor, high up on the Corcovado, is reflected in the lagoon. People make their way home, but the music still sings in their souls.

WYNTON MARSALIS
8. ”The Death of Jazz”
“0h, But on the Third Day”
The Wynton Marsalis Septet