Christmas Jazz Jam brings the American art of jazz improvisation to traditional songs loved worldwide and provides an opportunity to discover and enjoy modern jazz. Rooted in the spirit of New Orleans and the gospel church, these new arrangements of holiday standards are overflowing with down-home soul and joyous swing.
On this recording, Wynton and the band breathe new life into Christmas classics. Marsalis’s trumpet is joined by Don Vappie, banjo and guitar; Wycliffe Gordon, trombone and sousaphone; Vincent Gardner, trombone; Victor Goines, Wessell Anderson, Walter Blanding and Paul Nedzela on reed instruments; a rhythm section comprised of Dan Nimmer, Herlin Riley and Reginald Veal with the vocals of Roberta Gumbel joining the band on “Mary Had a Baby” and “O Little Town of Bethlehem”. 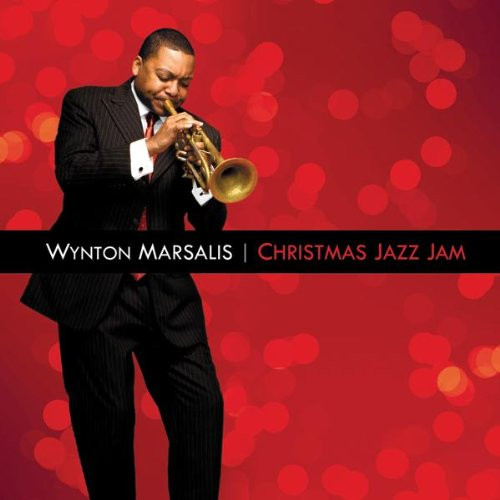 YOU ALWAYS GO WHERE YOU COME FROM

Wynton Marsalis is from New Orleans, the Crescent City of fable and fact existing where the Mississippi meets the Gulf. The music of his hometown is not only the basic driving force and conception of all jazz schools, it is directly used here in a traditional way that is also revolutionary. The word revolutionary is overused today but it applies here because of what this music demands of its players in technique, soul, and response to one another on the moment. New Orleans musical art, however direct and syncopated it might seem, it is never truly simple. At its best, New Orleans music contains profound human meanings that can steal up on us in the invisible medium of sound, collecting and delivering everything available to life.

Marsalis has found his own way and has also found the level of musicians with whom he could create what has become a subtle revolution in American music that is usually missed because it is not attached to a trend. Always a rebel in the interest of substance as opposed to fluff and glitter, Marsalis creates music completely based in what he considers the most significant American traditions. Those traditions do not hold him or his musicians “back” because they are reignited through individual personality. To make great jazz, one always needs great musicians or musicians who can step up to improvised greatness when the moment makes that demand. The instrumentalists gather here can do just that.

On this recording Marsalis has put together a unit that includes veterans from earlier groups he led going back to the 1980s. Part of the clear celebratory feeling heard here is in recognition of a reunion of artists bound together by objective facts and accomplishments. These are some of the finest musicians to appear over the last three decades and some of the finest to have ever played their instruments, which one can hear proven on albums such as Blue Interlude; Citi Movement; In This House, On This Morning; and Live At The Village Vanguard. Drummer Herlin Riley, alto saxophonist Wessell Anderson, bassist Reginald Veal, and trombonist Wycliff Gordon have each made it clarion clear that he is a soulful virtuoso of an almost unprecedented vocabulary ranging in blues and swing from New Orleans at the beginning of jazz to whatever was most soulfully played anywhere in the world last night.

These players all have absolute command of jazz sound and phrasing across all of its schools. They do not play in the way contemptuously meant by “sounding like a studio musician,” which referred to musicians who worked in the recording studios and could read anything set before them but tended to never project the soul of the musical matter. The revolutionary significance of these men is that they are more than technical professionals. Their music is not hollow because they are aesthetic professionals who know how to use what they know.

From the very subtle to the fire delivered at full blast, they share the depth of feeling and the essential sense of empathetic response at the timeless center of the music. That is why Marsalis and his men have been so successful at reasserting something that was lost from jazz over the years—clear, collective ensemble improvising far beyond a jumble of noise. Playing together at once is never as important as everyone being clearly heard at once. Such a goal calls for master musicians, and they are here, whether veterans from the 1980s or men that he has brought forward at different times since then. However long they have worked with Marsalis, or are appearing as guests, they all know what to do. Each of them has learned what is needed to make the material come alive as a vibrant piece of contemporary American art, given its center by the Crescent City.

New Orleans is a capital of celebration in the United States. It is a port city way down South in the tropic region of America once claimed by explorers from France but finally sold as a singular piece of the massive geography bought by Thomas Jefferson under the agreement known as the Louisiana Purchase. So much has happened in that particular part of the Purchase because New Orleans was in place and important during slavery. The chattel slave property was allowed to play, dance to, and sing whatever African music could be recalled in Congo Square. The African derivation of American music rooted itself distinctively in New Orleans and was always, in some fashion, about memory, “the long memory,” as one country bluesman called it.

There was also a big, easy mix of Caribbean and southern European influences. Mixing formed a cultural intercourse so that all of those elements created a particular vision of life that now known the world over for its unstoppable willingness to express the passions of affirmation in public. Private, intimate celebration is just fine; but those in the Crescent City like to match that epic sense of life’s goodness in the open air, where brightly colored costumes, giant puppets, human mannequins in period dresses beneath beauty marks and wigs seemingly intended to touch the sky, and those form merely fine clothes are quite appropriate. The range of intensity is almost sacred, appearing in the commonly recognized public form of praise booted and rebooted by a stomping audacity. That force tends to step just beyond the church. It is all in search of an endless and invisible cathedral built inside the self, to which one does not so much kneel as enter and take a second wind in flight from the blues.

Wynton Marsalis finds varied meanings made concise in the way he was led to feel about celebration in the days before Christmas. Those days led up to culmination revealed in the overt gestures and nuances praising the arrival of a savior sent to pass out blessings with epic variety. Savior in human form or a mere mortal, birth always points one way. The Georgia Sea Island singer Bessie Jones said that being born means you are going to die. That’s the meaning of the blues in a few words. The celebration of birth is fated to “cross over” into the shadow, where the fact of death is the engine and grief is the caboose. That is an unavoidable ride. Everyone gets a ticket and a seat on that blues train, the train of eternal night, that mystery train.

Because it is a capital of celebration and a capital where death is dressed down with the rebellious vitality of living, New Orleans provided the memory and the music Marsalis chose to make this CHRISTMAS JAZZ JAM. Every culture creates forms that can hold what its people consider timeless since no group we know of lacks the fundamental discoveries about life that never change, such as the joy of arrival and the sorrow of doom.

“New Orleans culture is always about addressing the ground rules of human life and resisting their shortcoming to the best of your ability. That is why New Orleans music and New Orleans style are perfect for a Christmas album. The music ranges from the extremely serious to the almost frivolous recognition of creatures invented to bring joy to children, like Rudolph the Red-Nosed Reindeer. One song might be about Bethlehem, another about Santa Claus and the North Pole. I have always enjoyed that sweep of what is going on. You have the devout attempt to reach something that will take you right up to nobility and another something that allows you to get next to a public myth like Santa Claus.”
— Wynton Marsalis

Wynton Marsalis compositions are published by Boosey & Hawkes and available now at wyntonmarsalis.org/store/sheet-music