Performances of trumpet concertos by Vivaldi and Telemann demonstrate why Wynton’s interpretations of Baroque music have become benchmarks in the classical music world. With characteristic musical insight and imagination, he even succeeds in making that tired old warhorse, the “Pachelbel Canon,” kick up its heels. 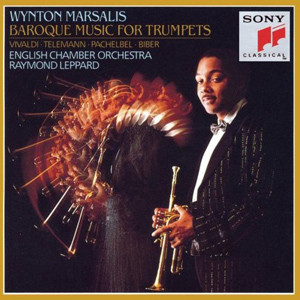 One of the challenges in putting together an album for solo trumpet and orchestra is finding interesting repertoire. It is easy to understand, therefore, why we were very excited when Wynton Marsalis suggested recording an album featuring Baroque music for various groupings of trumpets.
First it was necessary to decide which colleagues might join Wynton in this endeavor. Names of first-class soloists were suggested, and the performers were contacted, but persistent scheduling conflicts threatened the realization of the project. This logistical dilemma eventually inspired Wynton to volunteer a more novel approach—he, himself, would play all the solo parts (up to eight in the Biber!), taking full advantage of our digital recording technology and his instrumental virtuosity. The choice of conductor and orchestra was an obvious one: Raymond Leppard and the English Chamber Orchestra, whose previous collaborations with Wynton greatly contributed to the success of two Grammy-Award-winning albums.

As producer, I saw this technical “jig-saw puzzle” as a very appealing challenge. My main concern, however, was to prevent technology from descending into gimmickry or obstructing musical inspiration. Chief Engineer Bud Graham and I decided to address this concern by placing each trumpet overdub in the exact acoustic setting that normally would be occupied by different soloists in a real-time recording.
Our basic philosophy has always been to capture the sound of a performing ensemble with as few microphones as necessary. This allows the normal balance and blending of instrumental choirs to be achieved with minimal reinforcement from spot microphones. In this particular case, five omni-directional microphones were used to pick up the entire ensemble with two additional spot microphones—one for our soloist and the other just to give a bit more clarity to the woodwinds.

We recorded the album in St. Barnabas and Church in North London. The first step in the involved process was to record each selection with Wynton playing the first trumpet part in real-time with the orchestra and Raymond Leppard. For instance, in the case of the Telemann Concerti for Three Trumpets (recorded in February 1987), our soloist occupied a position to the left of the conductor. Once we were confident that all musical and technical aspects of the recording were covered (without the additional trumpets), we came back to New York and edited the tapes. In April of the same year, we returned to England and St. Barnabas, with edited multi-track masters in hand, to record the additional trumpet
parts – this time without the orchestra being physically present.

It may seem unwarranted to travel 3,500 miles to record one trumpet soloist in an empty church. This was the only way, however, to place Wynton in the identical acoustic environment that he occupied during the original sessions. Furthermore, the original five microphones used to pick up the entire ensemble in February were repositioned in precisely the same manner as before.
Armed with trumpet and headphones, Wynton and Raymond braved the cold damp interior of St. Barnabas to begin the exacting task of recording the other trumpet pans.
Using the Telemann Concerti as examples, the technique was as follows: Prior to the overdubbing sessions, I divided each movement into sections so that we could concentrate on perfecting the newly recorded material without having to continually return to the beginning if synchronization was off.

Each section of the master tape was then played in Raymond’s and Wynton’s headphones to reacquaint them with tempi, rubati, and overall performance. Once they gave the okay, our recording crew played back the master tape on one multi-track machine, recording the original first trumpet with orchestra material onto a second multi-track machine and simultaneously recording the new live,” second trumpet to adjacent tracks (see diagram). This process continued until we were satisfied that the movement contained a musically and technically acceptable second trumpet part. We then rewound our master tape and started once again from the top of the movement to lay down the third trumpet in the same manner. The preceding examples featured three solo trumpets.
Can you imagine what it was like to accomplish this same task with eight trumpets?!

In the Biber sonata, thanks to Raymond’s imaginative realization, the two groups of four trumpets were each required, at various times in the music, to perform from one of three different acoustical perspectives–present, semi-distant, or distant.
We could have simply recorded each trumpet part in close proximity to the microphone, adding varying amounts of artificial reverberation to create the illusion of distance. Instead, however, we opted for a more natural approach to fully exploit St. Barnabas’s fine acoustics.

First, Wynton recorded all the “present” material for each group in two positions–to the right and to the left of center. This was followed by physically moving our soloist away from the main array of microphones to capture the sound from different locations in the church. This process had to be repeated four times in each group to achieve the different perspectives.

To achieve a synchronization of sound when recording the “semi-distant” and “distant” passages, Wynton had to overcome the enormous difficulties inherent in the reverberant rime-lapse caused by the space between himself and the microphones. He had to play these overdubbed portions slighdy before the pre-recorded music to have them match. What he heard in his headphones, however, was the combined passages
(the newly recorded and pre-recorded passages).

Thus he heard himself playing (1) “in person” and (2) shortly thereafter, in the headphones, what he had just played combined with everything recorded before, while (3) anticipating the next part to be performed.

Our conductor and trumpeter might have been uncomfortably cold in the recesses of St. Barnabas, but one of our engineers, Peter Jones, was sweating it out in the control room making sure that each successive trumpet overdub appeared on the correct track of our digital tape machine—a miscalculation could easily have lead to the erasure of an already approved “take”! It should be noted, with appreciation, that Peter, as well as the entire engineering team, did an outstanding job confronted with such an unusual endeavor.

Secure in the knowledge that something special was contained within our master reels, we returned to New York City to put the finishing touches on the album. This consisted of “mixing down” or blending all of the overdub tracks into a realistic sound picture, a task that was actually simplified by the consistency in the recording venue (and hence the continuity of ambience) and by our “natural”
positioning of the over-dubbing voices as if more than one soloist were performing simultaneously.

A project of this kind could only have been successfully realized by the talent of Raymond Leppard, the English Chamber Orchestra, and the extraordinary trumpet mastery of Wynton Marsalis.

(check out Wynton’s blog about this album’s recording section)