In Pure Wynton Marsalis the transcriptions are taken from just three LPs. The debut LP Wynton Marsalis (CBS 85404) represented by one track, Who Can I Turn To? Here the melody is ever-present, though weU decorated. This is only of moderate range, the main difficulty for trumpet players approaching this solo is to play with accurate note values. The remaining tracks are divided between two albums. Believe Me If All Those Endearing Young Charms, The Last Rose of Summer and Sometimes I Feel Like A Motherless Child all stem from the roots of nineteenth century European Concert Music, and are taken from the 1987 album with the Eastman Wind Ensemble, Wynton Marsalis Carnaval (CBS MK 42137). 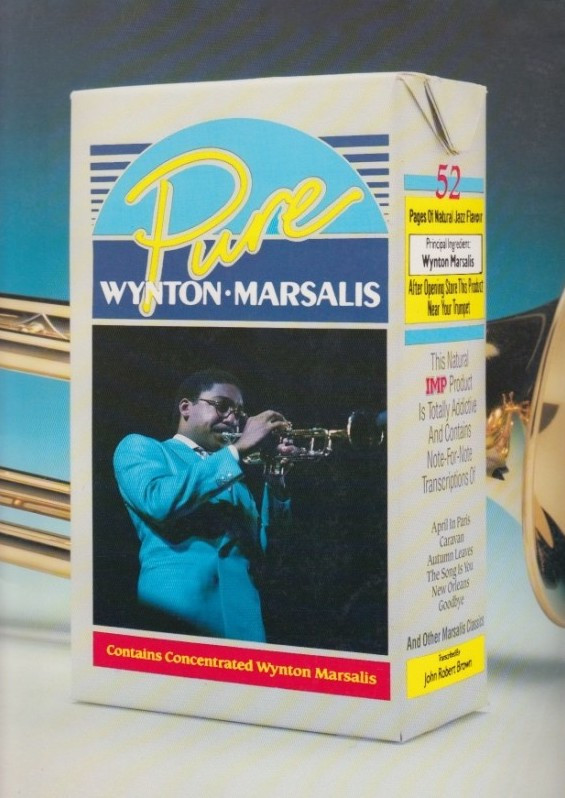 All three have cornet parts transcribed faithfully from the recordings. The piano arrangements are designed to be harmonically complete yet only of moderate difficulty, and are thus intended to be supportive piano parts rather than note-for-note reductions of the orchestral score. In this form these three pieces could well serve as small concert items or as graded examination pieces.

The remaining tracks are taken from the very popular Marsalis Standard Time Vol.1 of 1987. As with Who Can I Turn To? the trumpet line is transposed for Bb trumpet, and chords are given at concert pitch. This means that you can get a pianist or guitarist and play from the same book, or the individual trumpeter can play along with the record. Do try to obtain copies of the recordings, for to get the greatest benefit from this collection the records must be heard.

Points to note from the Marsalis Standard Time tracks include the accelerating effect achieved in Autumn Leaves (a much discussed topic when the album first appeared), and the strange rhythmic pattern achieved at the beginning of The Song Is You. Cherokee appears twice on the CD. This transcription is from the first interpretation, on track three. Hoagy Carmichael’s unusual sixteen bar tune New Orleans earns its place as a hometown tribute and because it’s good to improvise on. Time is the name of the game in April In Paris, both in the unusual placing of the opening melody notes and in the uncommon articulation (tonguing pattern) in the triplets later in the piece. Time – mysterious time – also characterises Goodbye. This was the tune that Benny Goodman used as a closing theme. Mention of Benny brings us back to the beginning, for in view of the above thoughts about the Two Cultures, and the rarity of musicians who can excel in both areas, maybe this is a subtle tribute to B.G. from a kindred spirit. I’d like to think so.